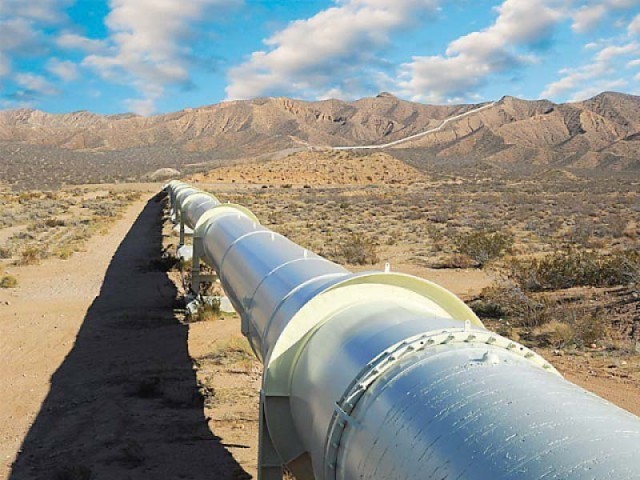 Hurdles in the way of building the pipeline like high altitude, freezing temperatures and rough terrain can be overcome with the help of advance technology. PHOTO: FILE

ISLAMABAD: The Frontier Works Organisation (FWO) and foreign investors have estimated an investment of $10 billion in laying a crude oil pipeline from Gwadar to Kashgar that will have transmission capacity of one million barrels per day.

The federal cabinet, in its recent meeting, was informed that engineering company FWO, in cooperation with private-sector foreign investors, wanted to build a crude oil pipeline from Gwadar (Pakistan) to Kashgar (China) and had requested the Petroleum Division to sign a memorandum of agreement that would assure the investors that Pakistan government would not take over the planned investment.

Provisional capacity of the oil pipeline will be one million barrels per day that can be enhanced further at a later stage. Furthermore, Pricewaterhouse Coopers audit and consulting services company has confirmed viability of the project for securing required funding of $10 billion.

A proposal in this regard has been sent to Planning, Development and Reform, Defence and Finance Divisions for their views. The Law and Justice Division has already endorsed a summary. Approval was also solicited for signing the memorandum of agreement with the FWO.

During the course of discussion in the cabinet meeting, it was pointed out that preamble to the memorandum of agreement had mentioned the Ministry of Energy (Petroleum Division).

The cabinet considered the summary for signing the memorandum by the FWO and the Ministry of Energy (Petroleum Division) and accorded its approval.

The pipeline will run from Gwadar Port to western China and will allow Beijing to diversify and step up imports of crude oil. Former prime minister Nawaz Sharif had floated the idea of constructing the oil pipeline during a trip to China.

Gwadar is quite close to the Persian Gulf from where nearly 40% of the world’s crude passes.

According to officials, China meets 50% of its oil demand through imports from the Middle East. Oil supplies come via Dubai-Shanghai-Urumqi route by covering a distance of around 10,000 kilometres.

Crude oil can be supplied through the shortest possible Dubai-Gwadar-Urumqi route – a distance of about 3,600 km. This can be achieved by laying an oil pipeline through the energy corridor up to western China via Karakoram Highway and Khunjerab Pass.

Hurdles in the way like high altitude, freezing temperatures and rough terrain can be overcome with the help of advance technology.

Many countries have successfully completed similar pipeline projects under extreme conditions and at high altitudes such as the Atacama gas pipeline, trans-Alaska pipeline and trans-Asia gas pipeline.