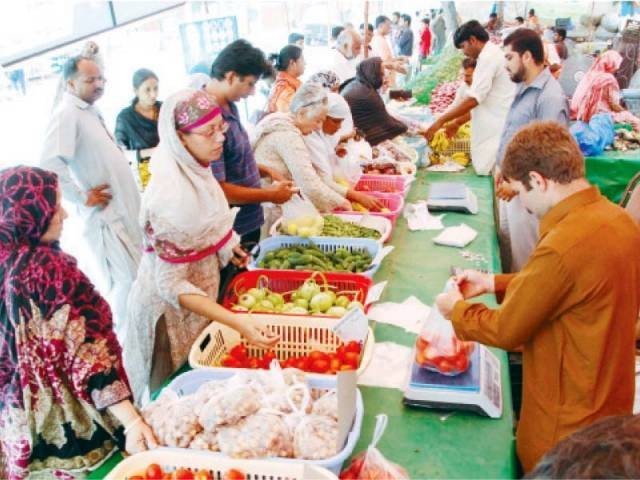 LAHORE: With the start of the holy month of Ramazan, profiteers have jacked up prices of almost all the essential commodities. Citizens complained that overcharging has reached its new heights in city markets and the government has miserably failed to control prices.

Speaking to The Express Tribune, a citizen Naseem Malik highlighted that both the federal and the provincial governments have announced billions of rupees Ramazan packages. Hundreds of Ramazan bazaars have been established across the provinces. Entire state machinery including ministers, mayors, deputy mayors, commissioners, deputy commissioners and other officials were trying to rein in commodity prices but have failed miserably in the absence of an effective and efficient price control mechanism.

“For 11 months, the government had little or no attention towards profiteering, overcharging and inflation. Now with start of Ramazan, all the government departments have been directed to regulate commodity prices. This half-hearted approach is the root cause of this menace,”  Malik said.

Another citizen, Abdul Ghani, complained that except a few big outlets, everywhere in the city and Ramazan bazaars, vendors were selling lowe quality fruits and vegetables for the price of premium products. He pointed out that most greengrocers in Ramazan bazaars were selling blended varieties of fruit and vegetables because the administration was not monitoring product quality.

“A couple of days ago,” he indicated, “banana was selling for Rs80-100 a dozen but now the same is being sold for Rs158-160 in Ramazan bazaars, while in open market profiteers have jacked up prices to Rs180. Same is the situation with other fruit and vegetables.”

A middle-aged housewife, Fareeha Begum, complained that lemons were not available in Ramazan bazaars. “Vendors are selling them at a higher price which is far above the list price but no government officials is taking action against them. Similar remarks were made by several other shoppers in Ramazan bazaars.”

Citizens visiting Utility Stores on first Ramazan also complained about a shortage of daily use commodities, like wheat flour, sugar, cooking oil, pulses and other pack products. A shopper, Hidayatuallah said he visited two branches of Utility Store but could not find sugar at a subsidised rate.

He urged the government to make arrangements for the provision of necessary commodities, otherwise, there was no use of these so-called utility stores and multi-billion rupees Ramazan subsidy package announced by the federal government. When inquired, an official of the Utility Stores Corporation (USC) disclosed that there was some issue in payments to different suppliers and companies. The corporation was trying to fix payment issue to restore the supply of essential commodities in Utility Stores. He indicated that there would be a shortage of sugar stocks available at Utility Stores in the city.