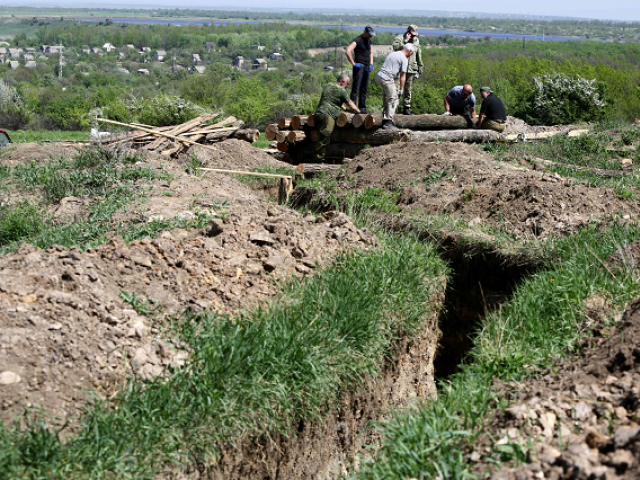 Activists dig trenches and make other fortifications on the front line near small industrial town of Yasynuvata, not far from Donetsk on May 5, 2018. Some ten people dig the dry land in the pro-Russian separatist east of Ukraine to build a new fortified line against 'Ukrainian tanks' in an atmosphere of "patriotism" dating back to World War II PHOTO: AFP

YASYNUVATA: In the mid-day heat, a dozen volunteers are spading dry soil in the pro-Russian separatist east of Ukraine, digging a new line of trenches aimed at keeping out Kiev’s tanks.

“We are preparing reserve positions in the event of a possible offensive by Kiev,” says Oleg, a 49-year-old unemployed man.
The trench-digging project was launched a month ago by a separatist battalion called Vostok, or east.

In front of Oleg stretch several hundred metres of trenches, equipped with three shelters made of tree trunks. All were dug by Oleg and his fellow separatist supporters.

Iran FM in Moscow as Russia moves to save nuclear deal

Calling themselves ‘volunteers’, a group of 20 or 30 gather at weekends near a cemetery on the outskirts of Yasynuvata, a small town near the rebels’ de facto capital Donetsk and just three kilometres (two miles) from the front line.

“The enemy is just behind that hill,” says Andrei, a 50-year-old bearded fighter in camouflage from the Vostok battalion.
“What do you think, how long would it take for Ukrainian tanks to reach central Donetsk from here?” adds Alexander Semyonov, a ‘veteran’ of the battalion, pointing at the horizon.

Armed with spades, saws and hammers, the men are building what they call a “second fortified line” for the armed forces of the self-proclaimed Donetsk People’s Republic (DNR).

“If you want peace, prepare for war,” Andrei repeats, using a Latin phrase.

Yasynuvata is far from the only site being used for such activities.
The Special Monitoring Mission of the Organisation for Security and Cooperation in Europe (OSCE) regularly refers in its daily reports to trenches or bunkers freshly dug in the separatist-held zone.

The conflict between the Ukrainian army and the Russian-backed rebels in the east has claimed more than 10,000 lives since April 2014.

Kiev and its Western allies accuse Russia of supporting the separatists by deploying several thousand regular Russian troops and mercenaries into Ukraine, a charge Moscow denies.

Although the Ukrainian authorities insist they will use only political and diplomatic methods to restore control over the rebel-controlled areas, the militants remain intractable.

“We regularly hear bellicose speeches from Ukrainian government officials saying we must be purged and defeated,” Andrei says.
“Based on the rhetoric of the Ukrainian authorities, an offensive could happen at any time.”

Nostalgia for the Soviet Union remains strong in the separatist-held territories, with many current fighters invoking World War II, known as the Great Patriotic War in the former USSR.

“For us, this is one and the same war,” Semyonov says, standing next to a pile of logs for building shelters.

“Let’s remember the Great Patriotic War: civilians dug out anti-tank ditches and trenches… We are their descendants and we are helping our army,” Oleg adds.