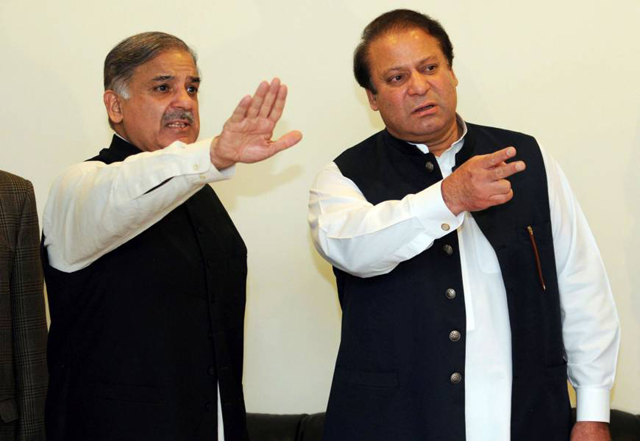 ISLAMABAD: The dramatic turn of events surrounding former prime minister Nawaz Sharif’s recent statement on the Mumbai attacks took another twist on Wednesday as PML-N President Shehbaz Sharif and Prime Minister Shahid Khaqan Abbasi failed to convince him to ‘soften’ his stance towards the security establishment.

Both Shehbaz and Abbasi went to meet Sharif at the Punjab House in the federal capital.

Reliable sources in the PML-N said a statement posted by the PML-N’s social media cell on the Facebook and Twitter earlier on Tuesday regarding the National Security Committee (NSC) declaration alarmed the prime minister and Punjab chief minister who visited the premier in a bid to persuade him not to issue hostile statements.

“Yesterday’s declaration is totally wrong and I reject it. I am not only a Pakistani citizen but the people of Pakistan also made me the prime minister of this country. Time has come to find out who took this country to where it is today. I know much and it’s high time the truth should come out in black and white,” the statement quoted Sharif as having said.

An informed party source said after the statement appeared on social media, Shehbaz wanted to have the statement removed immediately but his instructions were defied and the post is still present on the PML-N’s official accounts on Facebook and Twitter.

“Unlike other party matters, Shehbaz has little control on the PML-N’s social media cell mainly because it is directly controlled by Maryam Nawaz, who did not want the posts critical of the NSC declaration to be removed from the PML-N’s official accounts on social media,” the insider said.

“This is embarrassing for the PML-N chief, who is trying to defuse tension between his party and the security establishment, but the approach of some individuals close to Sharif is aggravating the situation.”

In addition, Sharif’s informal conversation with a group of journalists outside the accountability court in which the ex-premier hinted at revealing “real culprits behind the 2014 sit-in” and his strong criticism of former head of a security agency are also said to have raised concerns of the top government functionaries at the centre and Punjab.

Sources said that the former premier was in no mood to mend fences with the powerful state institutions – both the security establishment and the judiciary – and sounded “bitter than before” during the meeting with Abbasi and Shehbaz.

He showed no intention either to issue a retraction or explanation regarding his statement made during his recent interview with an English-language daily, it is learnt.

In a related move, PM Abbasi chaired the meeting of the PML-N parliamentary party in which the matter was discussed.

Reportedly, the meeting agreed that tension between the ruling party, its federal government and the security establishment needed to be defused and it was decided in the meeting that Shehbaz and Abbasi would hold a joint meeting with Sharif to urge him not to take the confrontation still further up, but failed — reportedly.

Nawaz Sharif ‘advised not to escalate confrontation with establishment’

The Express Tribune on Wednesday reported that PM Abbasi was under pressure from circles close to Sharif to convene a parliamentary party meeting of the PML-N in order to pass a unanimous resolution in support of Sharif and to condemn that Sharif was “misquoted by Indian media”.

However, no such motion was passed during the meeting. Sources said personally the prime minister was not in favour of convening the parliamentary party meeting on the matter as he reportedly believed that such a step would add fuel to fire.