It is yet to be determ­ined how close to the border fence Eight-month-old Leila al-Ghando­ur and her family were
By AFP
Published: May 15, 2018
Tweet Email 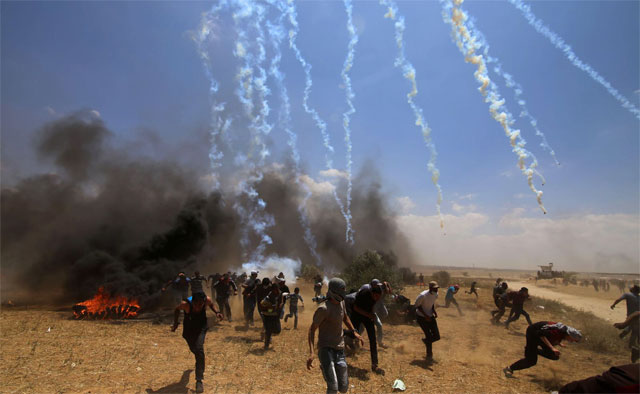 GAZA CITY: A Palestinian baby died as a result of inhaling tear gas during clashes along the Israel-Gaza border, the health ministry in the enclave announced Tuesday.

Eight-month-old Leila al-Ghandour was exposed to the gas east of Gaza City during major protests on Monday, in which the health ministry said 58 Palestinians were killed most of them by sniper fire.

It was not immediately clear how close to the border fence Ghandour and her family were.

At least five protests sites have been established since demonstrations began on March 30, most of them with both frontline areas and places for families further back.

Monday’s protests were against the opening of the controversial US embassy to Israel in Jerusalem, which had angered Palestinians who see the eastern part of the city as their capital.

Tens of thousands of Palestinians rallied near the border fence, with smaller numbers seeking to breach it.

Israeli forces on the border used tear gas and sniper fire on the crowds.