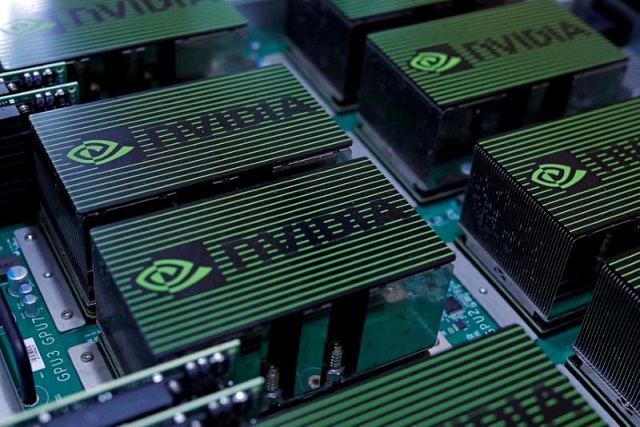 The logo of Nvidia is seen during the annual Computex computer exhibition in Taipei, Taiwan May 30, 2017. PHOTO: REUTERS

Too many cryptocurrency clients and fewer cloud computing orders than expected underwhelmed Nvidia investors on Thursday, although the graphics chip maker said a supply shortage that hit its core video game audience had eased.

The US company best known for chips that enhance video game graphics has diversified into an array of businesses including artificial intelligence, self-driving cars, and digital mining, but investors are most concerned with its inroads in the market for cloud computing.

Revenue from Nvidia’s data center business, which powers cloud-based services such as Amazon.com’s Amazon Web Services, Microsoft Azure as well as Alphabet’s Google Cloud, rose 71 per cent to $701 million, but missed analysts’ estimate of $703 million, according to Reuters.

The Santa Clara, California company for the first time disclosed that it made $289 million in sales – about 9 per cent of its overall $3.2 billion in revenue – from chips for mining cryptocurrencies.

Analysts had expected $200 million and the greater reliance on the fast-growing but volatile business contributed to shares falling 3.3 per cent to $251.66 in extended trading. Nvidia shares have gained 34.4 per cent this year, propelling the stock to the top of the Philadelphia Semiconductor Index. They touched a record high at $260.50 on Thursday before the announcement.

Chief Financial Officer Colette Kress said that the company expects cryptocurrency-related revenue to fall 65 per cent to about $100 million in the next quarter. Retail prices for Nvidia’s gaming chips surged earlier this year as miners snapped up chips, a development Nvidia addressed by releasing mining-specific chips.

“While supply was tight earlier in the quarter, the situation is now easing,” Kress told investors on a conference call. “Gamers who had been priced out of the market last quarter” were able to get their hands on new chips a reasonable price, she said.

Analyst Kevin Cassidy from Stifel said the reliance on cryptocurrency concerned some investors. Moreover, he said, Nvidia’s earnings were mostly in line with expectations, “which may not be good enough for shares trading at 40x forward earnings.”

Patrick Moorhead of Moor Insights & Strategy said he was not concerned by the lower-than-expected data center revenue because the buying patterns of huge cloud customers were “lumpy.”

“At the core of it, gaming is strong,” Chief Executive Jensen Huang told investors on the conference call. “The pent-up demand is quite significant and I’m expecting the gamers to be able to buy new GeForces pretty soon.”

A cryptocurrency boom has powered growth at Nvidia and rival Advanced Micro Devices, but the sector is battling volatility caused by swings in the currency’s value.

Swimming with dolphins in virtual reality to aid disabled

Nvidia in March suspended self-driving tests across the globe, a week after an Uber autonomous vehicle struck and killed a 49-year-old woman crossing a street in Arizona. But CEO Huang remained optimistic.

“I expect that driverless taxis will start going to market about 2019,” Huang told investors.

Analysts on average had expected revenue of $2.91 billion, according to Reuters.