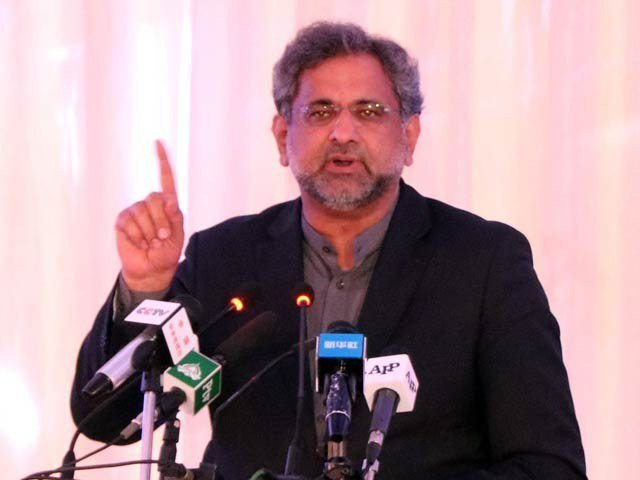 Indian ocean can play an important role in regional prosperity being hub of global energy and trade, Abbasi PHOTO: EXPRESS

Prime Minister Shahid Khaqan Abbas has stated that a greater emphasis needs to be placed on utilising Pakistan’s ‘exclusive economic zone’ in an efficient manner.

He said this while addressing the International Maritime Symposium on ‘Impact of Belt and Road Initiative on Geo-Economics of Indian Ocean’ being held at Bahria Univeristy in Islamabad on Monday.

PM Abbasi highlighted that the exclusive economic zone comprises approximately 40% of the country’s land mass, which thus far remains undeveloped. “Its development is of crucial importance to Pakistan because of its heavy reliance on sea lanes, hence there is a need to improve accessibility and connectivity to reap greater regional benefits,” he added.

Abbasi stressed the important role that the Indian ocean can play, being an important hub of global energy and trade. While Pakistan, can use its unique regional location to not only bolster its trade volume, but also connect the region with Western China and as far Central Asia, he noted.

The premier further added that positive developments are taking place in talks with Afghanistan, with issues such as trade and accessibility replacing the security centered rhetoric, while acknowledging the fact that Pakistan can only recognise its true economic potential by developing its infrastructure, which is being done under the China-Pakistan Economic Corridor (CPEC), with the construction motorways and roads to improve connectivity.

The prime minister was hopeful of achieving a GDP growth rate of 6% growth in the current year, while remaining optimistic that with the development of infrastructure it could jump up to 9% in 2019.

He also lauded the efforts of the Pakistan Navy, expressing his confidence in its capability to counter any security challenges in the region, while clarifying that Iran’s Chabahar port and Gwadar would not compete, but rather complement one another.

He lauded the civilian government’s efforts in providing essential support to the navy, adding that the prime minster had approved the set up of a modern shipyard at Gwadar, which would be beneficial to Pakistan’s economy, while effort are in place to set up another shipyard along the Pakistan coast.

The navy chief also expressed his confidence saying that that BRI and CPEC initiatives will give rise to shared prosperity in the region.

Director Centre for Pakistan Studies of Peking University Prof Tang Mengsheng said the CPEC will contribute a great deal in socio-economic development of both Pakistan and China.

Pakistan needs to watch out as CPEC-related debt soars

He added that China wishes to see Pakistan as a strong and developed country.

Speaking on the occasion, President of Azad Jammu and Kashmir Sardar Masood Khan added that Pakistan has assumed a unique position as it connects BRI to other parts of the globe through its flagship project CPEC.

The CPEC has given China direct access to the Indian ocean region, propelling Pakistan into a position of centrality and prominence in the region, he added. Khan stated that BRI would give fresh impetus for growth and development, create new supply chains in the region and reduce poverty and income differentials.

The AJK President also emphasised that Pakistan should prepare a comprehensive long term policy for the Indian ocean and fully utilise CPEC and Gwadar port’s potential to become a regional economic and maritime power, adding that Pakistan needs to build its naval presence in the Indian Ocean region to achieve this feet.