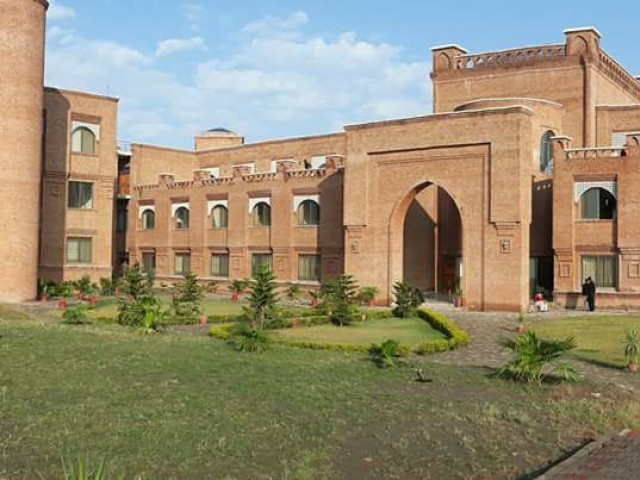 PESHAWAR: Already tense following a security alert about possibility of a terror attack around Ramazan, students living in the hostel of University of Engineering Technology (UET) Peshawar got scared when someone posted a handwritten page on the notice board asking everyone to vacate the hostel.

“All students are informing that due to receiving threats and worse situation the students should vacate the hostels and leave as soon as possible,” this fake notice pasted on the notice board created panic among the students and some of them even started vacating the premises.

However, the UET Peshawar administration clarified that it was a hoax and there was no need to leave the hostel.

It could be the work of a prankster, the UET Vice Chancellor Dr Iftikhar Hussain said. He said the timing of the prank was dreadfully correct since a red alert was issued a few days ago.

All campuses were informed to observe strict security measures, Dr Iftikhar said. However, he reiterated that the notice to vacate the hostel was a hoax call.

According to UET Teachers Association President Dr Nasir Ali Khan the security officers of the university after meeting with Capital City Police Officer Qazi Jameel have circulated a general notification about the precautionary measures in a situation of any possible threats alerts. Dr Nasir also clarified that this was mistaken as a terror threat alert and meanwhile a handwritten notification possibly by a student is circulated on the social media to vacate the hostel. This had created panic amongst the students living in hostel.

He explained that no such specific threat alerts to the varsity and the provost office of the university has directed the hostels wardens to control the satiation and not allow the students to vacate the hostels.

However, this fake notice created panic amongst students and some students also left for home at night. To handle the situation the vice chancellor take notice of the issue and directed concerned officials to convince the students that it was a false alarm and there was no need to run away.

The prank followed issuance of a list of security measures the administration had asked the students and staff to adopt. UET Provost Office through a notification directed all resident wardens of hostels to adopted precautionary measures till Ramadan with immediate effect in hostels and university as informed by CCPO Qazi Jameel and SSP Operation Javed Iqbal Wazir.

In order to strengthen the security arrangements of Educational institutions of both private & govt,a meeting was held at Police Club of Malak Saad Shaheed Police Lines, Peshawar, chaired by SSP Operations Javed Iqbal Wazir, attended by SSP coordination, SP security & heads of all the govt & private Educational institutions. During meeting, SSP Wazir apprised the participants of the silent features of Sensitive Vulnerable Establishment & Places (Security) Act and urged them to improve the security apparatus at their institutions in order to avoid any mishap.

According to the UET notification a copy of which copy was available with The Express Tribune, all students were directed that identity cards should be displayed prominently on the chest and it should checked at hostel and university gate regularly.

Owing to a security threat, morning assemblies in schools, colleges and other such gatherings should be stopped. Gatherings, sitting of students in groups at any place or room should be prohibited.

The notice stated that emergency evacuation drill rehearsal should be conducted at hostels and that the girls and boys should be trained in taking cover, hiding and lying down on ground instead of running and walking round in case of terror attack.

It also stated to keep vigilant eyes on people coming to visit students, and also those coming and going towards servants quarters.

The document asserted on checking serviceability of weapons in use of security staff.

The notice further directed that students should keep changing their time and route for pick and drop from the campus.