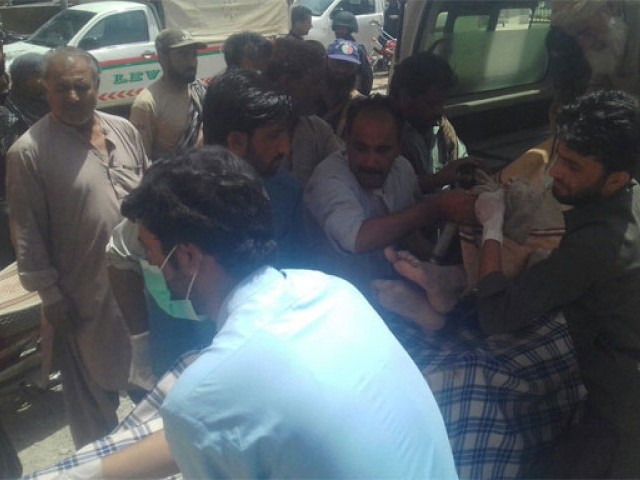 The labourers were working on network installation for a private telecommunication company. PHOTO: EXPRESS

According to levies forces, the labourers, who hailed from Punjab, were working without any security and did not have a no objection certificate (NOC). The Frontier Corps (FC), levies forces and administration reached the site of the incident and shifted the bodies to Civil Hospital.

Earlier this year, unidentified attackers sprayed bullets on two Balochistan Constabulary (BC)’s RRG personnel on Sariab flyover, martyring one and injuring other. Muhammad Alam and Shah Nazar were on their way to their duty location when armed men opened fire on them at the flyover before fleeing.

“As a result of the firing, BC Rapid Response Group official Muhammad Alam was killed on the spot and Nazar Shah sustained injuries,” police said. Rescue workers and a heavy contingent of law enforcement officials reached the spot and shifted the body and the injured man to Civil Hospital.

One person was killed and three others seriously injured when unidentified men on a motorcycle hurled a grenade at a funeral in the Mand area of Kech district, on Thursday.

Sources said that the motorcyclists hurled a hand grenade at mourners. The grenade exploded near the funeral prayer area.
“One person praying was killed on the spot and three others were seriously injured,” sources said.

The deceased man had not been identified when this report was filed. The injured were shifted to District Hospital Mand.

Sources said that men targeted levies Risaldar Feroz Khan as he was leaving his residence in the Gichak area of Panjgur district.

“Gunmen riding a motorcycle opened fire on the levies officer and killed him on the spot,” a senior levies official told The Express Tribune, adding that the attackers then fled.

Levies and FC personnel rushed to the spot and shifted the body to a hospital. No one has claimed responsibility for the attack.

Security forces launched a search operation in the area to locate the attackers. No arrests had been reported till the time this report was filed.