Armenian ruling party says will not nominate candidate for PM

Armenian ruling party says will not nominate candidate for PM

Ex-Soviet Armeni­a has been in the grip of a severe politi­cal crisis­
By AFP
Published: April 29, 2018
Tweet Email 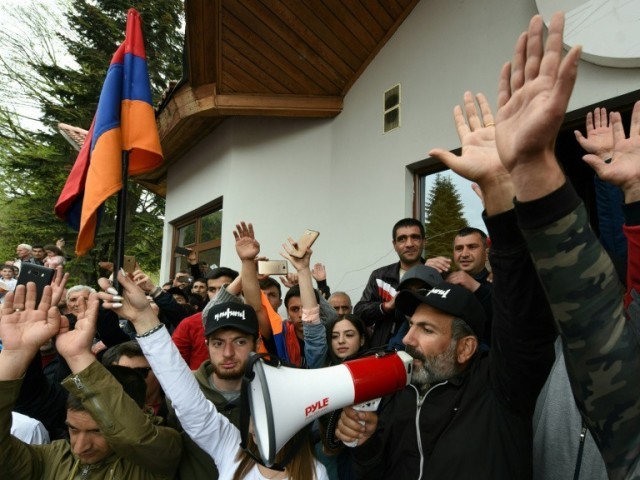 Ex-Soviet Armenia has been in the grip of a severe political crisis for the past two weeks with the protest movement charging that Sarkisian and his ruling Republican party were making a power grab.

“The Republican Party has decided not to nominate its candidate,” said Eduard Sharmazanov, vice speaker of parliament and the ruling party’s spokesman, citing the interests of the people.

The party will wait until all candidates are nominated by April 30 and then decide who to back.

It was not immediately clear whether the ruling party — which has a majority of seats in parliament — would back the head of the protest movement, Nikol Pashinyan, or another candidate.

Sharmazanov said earlier he personally doubted Pashinyan was a suitable candidate for the top job.

The ruling party said earlier it would announce its position on a May 1 vote to elect the country’s next prime minister on Monday.

The Prosperous Armenia Party, which holds 31 seats in the 105-member chamber, said Saturday it was backing Pashinyan.

The party “won’t present a candidate and will support the candidate of the people, which is what he (Pashinyan) is,” its chief Gagik Tsarukyan told the Kentron television channel.

Observers fear the turmoil could destabilise the Moscow-allied nation which has for decades been locked in a territorial dispute with Azerbaijan.

Sarkisian resigned this week as the country’s new prime minister after serving as president for a decade.

Pashinyan has issued an ultimatum to the authorities, saying that he should be elected the next prime minister — who holds the country’s top job under a parliamentary system of government.

He however does not have enough votes to get elected.

Moscow has urged compromise and Russian President Vladimir Putin this week spoke by phone with the interim head of government, stressing the importance of the upcoming election.

On Friday, acting head of government Karen Karapetyan refused to hold talks with the protest leader, accusing him of promoting his own agenda and worsening the crisis in the poor country of 2.9 million people.

The United States urged “good faith” in negotiations, with a State Department statement calling for “a resolution that reflects the interests of all Armenians.”

Tens of thousands rally in Armenia as ex-president elected PM

Addressing supporters in his birthplace Ijevan in Armenia’s bucolic north earlier Saturday, Pashinyan pledged equal rights and opportunities for all, saying the country had turned a new page after Sarkisian quit power.

“Every citizen will have equal rights and opportunities,” he told supporters. “From now on people will not be judged by who their acquaintances, friends and relatives are.”

He also said he was ready to meet with members of the ruling party to discuss a “peaceful transfer of power.”

Over the past two days, the 42-year-old has received a hero’s welcome in a number of towns and villages outside the capital Yerevan, driving around the landlocked South Caucasus country with his supporters in a convoy.

“We want change in Armenia and Pashinyan to be elected prime minister right away,” said Arman Ovsepyan, a 43-year-old musician.

“If the Republicans refuse to leave power, we will force them to do so peacefully.”

After a brief halt to two weeks of nearly non-stop rallies, protesters were expected to return to the streets of the capital on Sunday.

North Korea offers to close nuclear test site in May, invite US experts