CJP questi­ons how can he take steps regard­ing others when his own instit­ution is not in order
By Muhammad Haroon
Published: April 28, 2018
Tweet Email 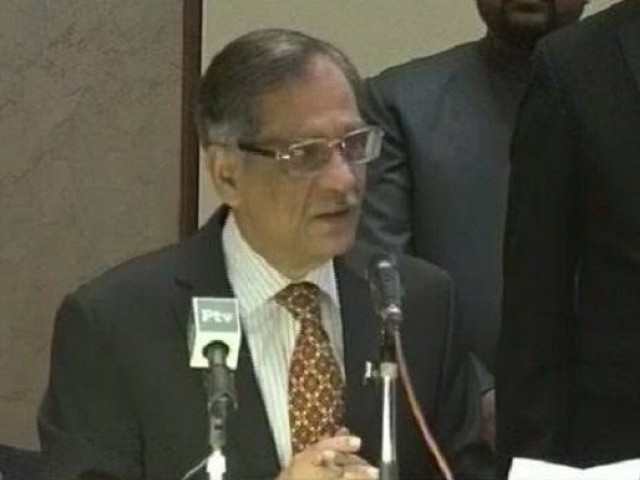 LAHORE: Chief Secretary of Punjab informed the Supreme Court (SC) on Saturday that the Chief Justice of Lahore High Court (LHC) Justice Muhammad Yawar Ali has been provided a vehicle worth Rs24 million.

The bench resumed the hearing for the suo motu taken on officials using luxury vehicles at the Lahore registry. The two-member bench, headed by the Chief Justice of Pakistan (CJP) Mian Saqib Nisar questioned the secretary over the state of affairs.

When Justice Nisar asked about the luxuries provided to Justice Yawar, the secretary informed him that the said vehicle is also being converted into a bullet-proof one. “How can I take steps regarding others if I don’t clean my own institution?” he questioned.

“Different institutions possess luxury cars, the concerned boards take the decisions of providing the said vehicles,” the secretary informed the bench when questioned who approves of the vehicles’ deployment.

“Call the concerned boards and bureaucrats working in the companies, they should be prepared to return the excess amount taken for such luxuries,” the top judge remarked. “I don’t give them any time.”

The secretary then informed the court that more than two judges of the high courts are given bulletproof vehicles. “According to the law, high court’s CJ is allowed to keep 1800cc car but not bulletproof,” he informed the bench.

The CJP then sought details of the number of government officers who possess Land Cruisers.

The Supreme Court of Pakistan on Monday directed the top provincial police officials to ensure the provision of security to all those who face genuine security threats.

Following his earlier orders ordering inspector generals of the provinces to withdraw security of individuals not entitled to protection, the chief justice during the hearing of the case remarked that the move was made to save taxpayers’ money. The bench also sought a report from provincial IGs to determine the criteria under which security will be provided to individuals.

The court further directed all provincial advocate generals to be present in court. “What’s the status of taking back security from unauthorised personnel?” he questioned. “Some people have issues with their security taken back. Even the media is raising concerns,” he said, adding that the court does not want to put anyone’s life in danger.

“If Nawaz Sharif and Asfand Yar Wali are liable for security then they must be given so according to law,” the CJP directed. “Find out if Wali has security now, Nawaz has the security of a former prime minister, he should get security according to the law’s provision,” he added.