Lowest in 16 years: Terror losses pegged at $2b

Lowest in 16 years: Terror losses pegged at $2b 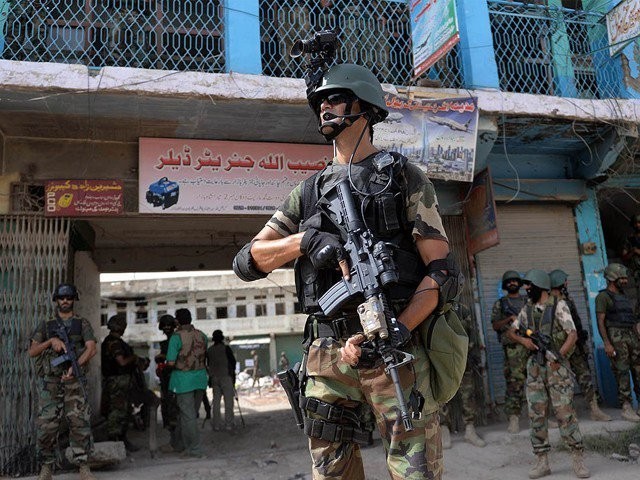 Soldiers patrol at an empty bazaar during a military operation against Taliban militants in the main town of Miramshah in North Waziristan on July 9, 2014. PHOTO: AFP

ISLAMABAD: Pakistan witnessed a significant improvement in domestic security situation, accruing lowest annual losses from war on terrorism which declined to a 16-year low of $2 billion in this fiscal year, according to the Economic Survey launched on Thursday.

Cumulatively, Pakistan’s losses on account of terrorism mounted to $126.8 billion since after 9/11 terror attacks but the country continues to bleed because of state-sponsored terrorism by its immediate neighbours, the survey noted.

Although, the losses are still significant on public finances and national economy, the downward trajectory in yearly additional losses marks improvement in overall security situation.

This year’s losses were $3.4 billion less than what the country suffered in the previous fiscal year, reflecting positive results of the military-led offensives.

These losses are in effect lower than what the country suffered in a single year since 2001-02 when it lost $2.67 billion on account of terrorism.

“Pakistan continues to be a target of terrorism, including state-sponsored terrorism from its immediate neighbours,” according to the Survey.

Pakistan started including the cost of terrorism in its annual economic performance presentations after the 9/11 terror attacks, taking into account heavy loss of lives, missed economic opportunities and damages to infrastructure.

The Economic Survey noted that Pakistan’s success in countering terrorism was acknowledged in the recent Global Terrorism Index Report 2017 published by the Sydney-based Institute for Economic and Peace. According to this report, Pakistan ranked at 5th out of 163 countries with a score of 8.4 out of 10. In 2007 the country was ranked at 4th.

This is the third consecutive year that Pakistan has witnessed fewer terror attacks and deaths, according to the Economic Survey.

The cost of war on terrorism is worked out by an inter-ministerial committee, having representation of ministries of finance, interior, foreign affairs and a joint ministerial group.

The Economic Survey stated that a substantial portion of national resources was diverted to address emerging security challenges and repair damaged infrastructure over the past several years.

According to the survey, terrorism disrupted normal economic and trading activities in Pakistan, resulting in higher cost of doing business besides, disrupting production cycles, resulting in significant delays in meeting the export orders.

Damages to foreign investment went down from $1.1 billion to just $129.1 million in the outgoing fiscal year.

The uncertainty cost decreased from $71 million to $14 million. The compensation to the people affected by the war against terrorism also decreased from $90.6 million to just $39.3 million, indicating restoration of peace in settled areas. Damages to physical infrastructure were reduced from $272 million to $111.6 million.