Halls told to bring their struct­ures in line with civic body’s regula­tions
By Our Correspondent
Published: April 26, 2018
Tweet Email 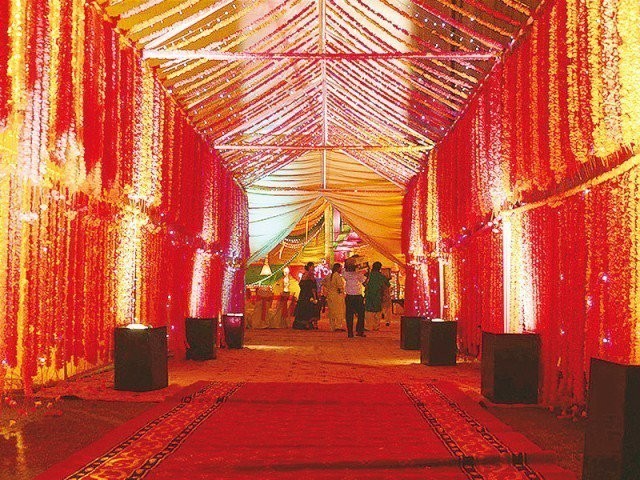 ISLAMABAD: The civic agency has served notices to the owners of two marquees located on Club Road, directing them to bring their buildings in line with building regulations of the city within a fortnight.

Five years ago in March 2013, the Capital Development Authority (CDA) Building Control Directorate had allowed land, meant for motels, to be ‘temporarily’ used for commercial purposes as marriage halls.

Later on, without approval from the federal government, they had approved building plans for the installation of marquees for use as wedding halls.

The temporary permission was withdrawn in March last year but the hall owners managed to get a stay order from a local court. The CDA officials, though, never made any attempt to have the stay vacated.

The marquees were allowed with permission from the then CDA member planning and design Mustafain Kazmi who allegedly exercised powers of the federal government even though part of the area fell in the Margalla Hills National Park (MHNP) where construction for commercial activity is prohibited.

The reasoning provided for the move was said to be an attempt to curb the rising trend of non-conforming use of agricultural farms as marriage halls. Permission was then granted for the construction of temporary canopies for five years without charging a single penny for the “change of trade” or use.

It paved way for another similar move when a marquee owner in Lakhwal, near the Rawal Lake in MHNP, demanded the same leverage as a Constitutional right before Supreme Court.

A few weeks ago, Federal Ombudsman Tahir Shahbaz summoned a meeting of marriage halls and marquees located in the Islamabad Capital Territory.

Shahbaz asked all the parties to submit the required documents, containing relevant necessary details about their halls and marquees. All the concerned parties had also been asked to submit their written reports on the said date.