A large cache of arms and explos­ives was also seized during the operat­ion; 28 suspec­ts booked­
By Mohammad Zafar
Published: April 21, 2018
Tweet Email 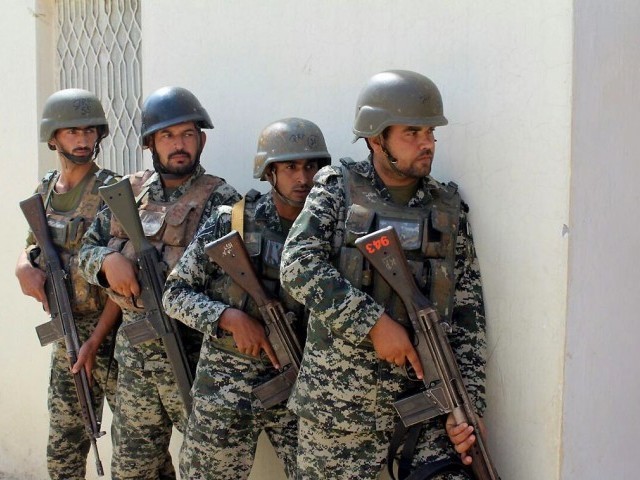 QUETTA: At least five miscreants involved in carrying out attacks on security forces and government installations were killed during a search operation in Dera Bugti on Saturday.

Security sources said the forces, on a tip-off, launched raided Bamboor area. The terrorists who were hiding in the camps opened fire. “On retaliation, five terrorists were killed while their training camps also destroyed.”

A large cache of arms and explosives was also seized during the raid while 28 suspected persons were booked.

Meanwhile, a rebel commander, namely Bojla Bugti, along-with his 10 group members laid down arms before the Home Minister Sarfaraz Bugti during a ceremony in the area.

Earlier this month, two terrorists were killed and a Balochistan Frontier Corps (FC) personnel embraced martyrdom in an exchange of fire during intelligence-based operations (IBOs) in the restive province.

According to the Inter-Services Public Relations (ISPR), IBOs were carried out in Pinsin Kaur, Dasht, Turbat and Dera Bugti. A large cache of arms and ammunition was recovered from hideouts.