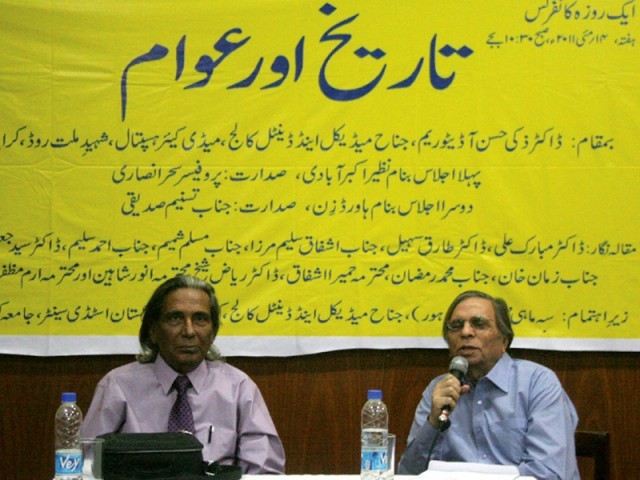 Students rigorously took notes, teachers and lecturers hung on to his every word, while fellow historians squirmed in their seats – both in agreement and disagreement – as the never-ending debate of the lack of public representation in historical documentation took place on Saturday at the Jinnah University College.

Regarded as an anti-establishment thinker, Dr Ali has written books and articles on India-Pakistan history and is also the editor of the quarterly journal, Taarikh.

The session was divided into two parts: one was to look into the works of an 18th century Indian poet who is regarded as the ‘Father of Nazm’, Nazeer Akbarabadi, while the other was devoted to American historian, academic, author, playwright and social activist, Howard Zinn. Seated next to Dr Ali was Prof Sahar Ansari, an Urdu poet, critic and scholar of Urdu linguistics. Meanwhile, Dr Ali continued to discuss the dearth of historical data in the subcontinent. “People can only gain awareness through education.”

He compared the current socio-political scenario of Pakistan to the Mughal Empire, claiming that both the situations are identical. With a PhD on the Mughal Dynasty, he called for the rewriting of the subcontinent’s history. “People will lose interest if we only write the history of our forefathers.”

He spoke of Akbarabadi. “The poet was an ustaad (teacher) in Agra at a time when it was not respectful to work,” said the historian. In Akbarabadi’s work, you can see “aam logo ki jhalkiyaan” (highlights of the common man).

Then, Sustainable Development Policy Institute senior researcher and Punjabi poet, Ahmed Saleem, took the podium. He talked about those historical ‘heroes’ that are glorified in history. He gave examples of Mughal emperor Aurangzeb and Sikh Maharaja Ranjit Singh. “Singh was a great leader who managed to expand his territory. He was a hero for Punjab and the Sikhs but he was a killer for those who were victims of his atrocities,” explained Saleem. He concluded that it was a matter of whether people could look at historical events with ‘insaaf’ or with a sense of justice.

The problem with history is that it is written from a certain perspective – or by those who win wars. Through time, different historians, leftists, rightists and traditionalists, emerged with their own outlook of events, while some look at history through the eyes of their politicians.

University of Karachi’s Pakistan Studies Centre director Dr Jaffar Ahmed spoke how the argument of whether history is or should be a reflection of its people is redundant today. “Cultural media and technology determine what people do. So we no longer write our own history.”