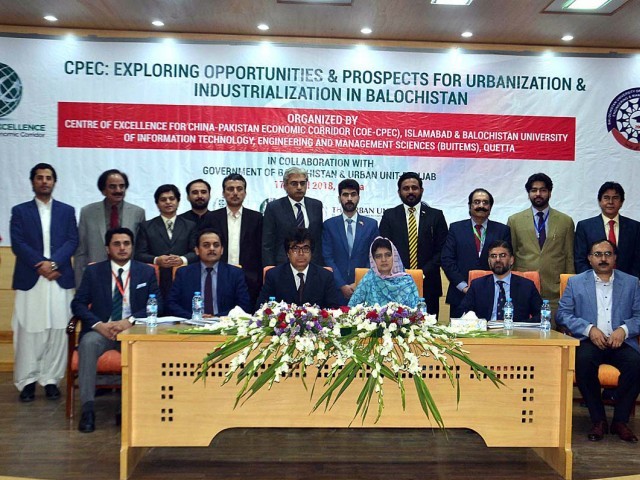 QUETTA: Balochistan Assembly Speaker Rahila Hameed Khan Durrani has said that harmony is needed on national and provincial levels to understand the sensitivity and various aspects of the China-Pakistan Economic Corridor (CPEC).

“CPEC is not just a game-changer project but a project that has become vital for the survival of Pakistan because the international community has deep interest in the project,” said the Balochistan Assembly speaker while addressing a ceremony at the Centre for Excellence of the Balochistan University of Information Technology and Management Sciences (BUITMS) on Tuesday.

The ceremony was held to review benefits Balochistan would obtain from the CPEC project.

Durrani said, “Every Pakistani is looking towards this multi-billion project. We have to use our minds in order to lead this project to its completion.”

She said the project was the only game changer for the whole region, particularly Balochistan.

Stressing upon building confidence and understanding among provinces, she said, “Whenever I deliver an address at a national forum regarding CPEC, people always ask about the financial agreement and preparation for this vast project.”

She further said, “We need to build confidence and understanding among all stakeholders, including China, because we have been facing challenges on provincial, national and international levels regarding this project that must be addressed for halting further divisions.”

The speaker expressed her concern over the likely exploitation of the rights of local people after completion of CPEC and said that exploitation should be avoided.

She said, “The whole world will invest in Pakistan after we complete this project, but we have to take immediate measures for protecting the legal rights of the local people. I have urged the assembly members to adopt legislation in this regard.”

She urged training for the people regarding modern technicalities in Gwadar port, saying, “There is a need to build more training centres as after the CPEC there will be multicultural challenges and we have to be prepared to face all of them.”

She said that she was attending a conference held to discuss detailed aspects of CPEC for the first time.

“In order to walk side-by-side with the modern world and lead this project, we have to build data and information centres that can keep us in the loop about other stakeholders who have due shares in this project,” she stressed.