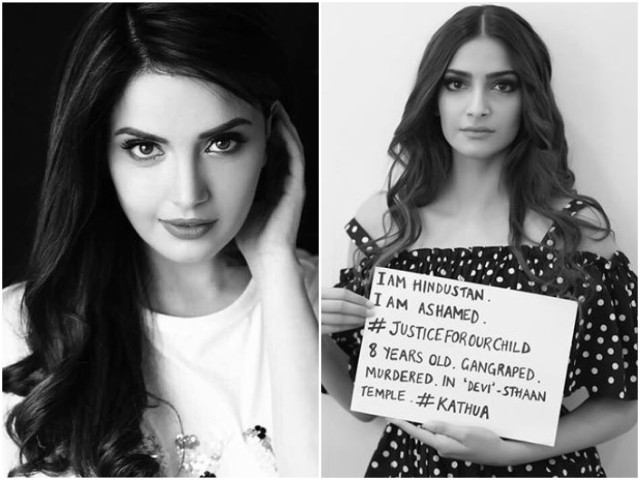 News of eight-year-old Asifa Bano’s rape has taken India by storm. The young girl had gone missing in early January 2018 and was found dead under mysterious circumstances in the Hiranagar tehsil of Hindu-dominated Kathua district, initial reports suggested.

While tensions between Pakistan and India have always been on the high, celebrities from both sides of the border have come together to now demand justice for innocent Asifa.

Armeena Rana Khan, Priyanka Chopra, Anushka Sharma and Nawazuddin Siddiqui amongst many others addressed the huge act of crime.

The cruelest form of evil is harming an innocent child. What is happening to the world we live in??? These people should be given the most severe punishment there is! Where are we heading as humanity?
Shaken to my core.#JusticeforAsifa

HOW do human beings go through evil acts on another human? During an act, how do they not stop? Is there no concience? No guilt? No regret? No humanity? HOWWW do you allow yourself to go through raping and killing a child?! Cannot understand it. #JusticeforAsifa

Its not about Hindu VS Muslim . Its about those inhuman people who exist in our society . Injustice anywhere is a threat to justice everywhere . Lets come all together and fight for injustice #JusticeforAsifa #JusticeforUnnao #Justiceforourchild #WakeupGovernment pic.twitter.com/qd7oj53rGB

Injustice anywhere is a threat to justice everywhere! #JusticeforAsifa pic.twitter.com/MCdV9IASFi

The cruelest of crime! Sickening to the core. Justice needs to be served! Laws should be amended and made more stringent for atrocities like these!!! #justiceforasifa pic.twitter.com/9cnBS5Su2g

Humanity is dead. How much more has to happen. We have to stand together and fight before it happens to anyone again. M sorry this nation wasn’t safe for you. #JusticeforAsifa

It chokes me to know that such monsters exist in the form of humans!! Makes me sick!! Justice must be served NOW and we need a change..a punishment that scares the SH*T out of anyone who even thinks of committing such an inhuman crime in the future! Enough! #JusticeforAsifa

We have failed as a society! Being a father, I am shaken and filled with anger reading about what happened to a 8 year old kid. My heart goes out to Asifa's family. I refuse to accept we really let THIS happen. Justice has to be served NOW. #JusticeforAsifa

Some celebrities held out posters stating that they felt ashamed.

I am Hindustan. I am Ashamed. #JusticeForOurChild
8 years old. Gangraped. Murdered.
In ‘Devi’-sthaan temple. #Kathua pic.twitter.com/8SIR9hYswI

Even Indian music producer Vishal Dadlani has also urged people to take a stand and not let this matter slide.

Don't let this matter be pushed aside by the news-cycle driven media. Raise your voice, put up your own pictures and tag me. pic.twitter.com/hf5oj3uyBJ