Which came first: the people or the sweet potatoes?

Which came first: the people or the sweet potatoes?

Resear­chers at Oxford Univer­sity say plant made its way to Pacifi­c island simply by seeds travel­ing on the wind
By AFP
Published: April 13, 2018
Tweet Email 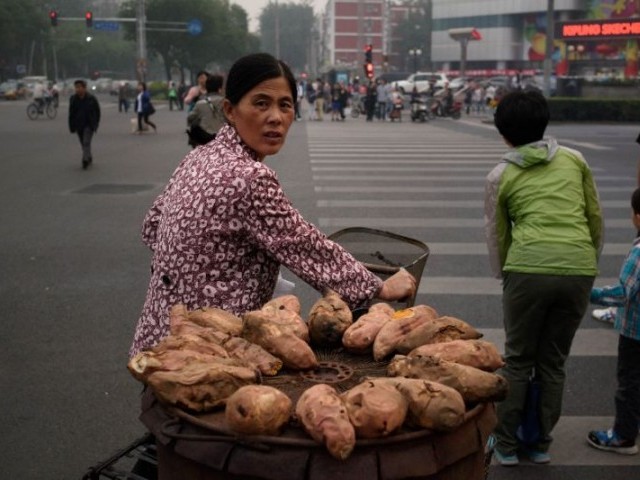 How sweet potatos, seen here hauled by a street vendor in Bejing, spread from South America to Polynesia centuries ago is the subject of a new study that concludes that wind-borne seeds is the likely explanation. PHOTO: AFP

TAMPA: The bulbous, colorful sweet potato has long been seen as an artifact of mankind’s first ocean voyages, ferried from its home in South America all the way to Polynesia centuries ago.

But a controversial new study Thursday questions that assumption, using the most extensive genetic analysis yet to suggest that the sweet potato was widespread on Earth long before humans came into the picture.

Researchers at the University of Oxford say their findings show that sweet potatoes (Ipomoea batatas) originated in South America some 800,000 years ago, and that the plant likely made its way to the Pacific island simply by seeds traveling on the wind.

“We show there is no need to invoke human-mediated transport,” co-author Tom Carruthers, a PhD student at the University of Oxford, told AFP.

“Sweet potato evolved before humans so the origin of sweet potato hasn’t got anything to do with humans.”

However, some experts questioned the findings, saying they ignore an ample amount of archeological and linguistic evidence that suggests early Polynesian marine navigators traveled to South America and brought the sweet potato back with them as early as 1000-1100 AD.

The far-flung sweet potato has long been seen as a sign that indigenous people were capable of crossing the oceans long before Christopher Columbus’s 1492 journey.

But the notion has stoked debate as far back at the 19th century.

Could such voyages really have been possible?

The study in the journal Current Biology takes a molecular biology approach to answering the riddle of how the sweet potato made it to the Pacific before Europeans.

Using the latest advances in genetic technology, researchers analysed 199 specimens of modern and historical sweet potato worldwide, along with its wild relatives.

One sample, housed at the Natural History Museum of London, came from the Captain James Cook’s original expedition to New Zealand and the Society Islands in 1769.

By extracting DNA from various specimens, then analyzing how much they differ from each other, scientists can figure out how long ago they diverged, or had a common ancestor.

The earliest specimen of sweet potato collected from Polynesia has “a unique genetic signature suggesting that it diverged from its other samples on the American continent more than 100,000 years ago,” said the study, describing the evidence as “extremely strong” that humans had nothing to do with it.

Therefore, Carruthers said it’s more likely that wind dispersal, or seeds hitching a ride on a bird or a clump of sea debris, helped the sweet potato become so widespread on Earth.

VIDEO: Are McDonald’s fries really made out of potatoes?

Another genetic study in 2013, led by French researcher Caroline Roullier, using a smaller DNA dataset on sweet potatoes, supported what is known as the tripartite hypothesis, which holds that sweet potatoes were dispersed by human travelers in three different waves.

The idea is that sweet potatoes were introduced into Oceania by Polynesian natives, then later newly introduced and spread across the Pacific by Europeans on two different routes from Mexico and the Caribbean.

Robert Scotland, professor of systematic botany at the University of Oxford, said his team’s dataset was far larger than Roullier’s, and included more than 600 nuclear genes.

But Pat Kirch, an expert in South Pacific archeology at the University of California, Berkeley, disagreed with the Oxford-led study, saying it failed to undermine the tripartite hypothesis.

Woman clubbed to death for trespassing through potato fields

Kirch said that even if the kind of sweet potato found in Polynesia diverged from its relatives in South America more than 100,000 years ago, it is still possible that this particular, divergent sample was picked up by Polynesians visiting South America, and brought back with them.

Furthermore, the Oxford team fell short of proving that it made its way by wind, he said.

“To prove natural distribution, they would have to have direct evidence of sweet potato in some kind of paleobotanical context, pre-human. Like pollen,” he told AFP.

He also said the team was “thinking quite narrowly,” ignoring evidence like radiocarbon-dated fossilized tubers found in Pacific Island archeological sites, and the fact that the Polynesian word for sweet potato is “kuumala,” which resembles “kumara,” or “cumal,” the terms in a language spoken by Andean natives.

“Don’t tell me it is far-fetched that Polynesians made it to South America,” Kirch said.

“A few months ago, people finished a voyage around the world in a replicated Polynesian canoe.”

Tolkien’s ‘The Fall of Gondolin’ to release summer 2018