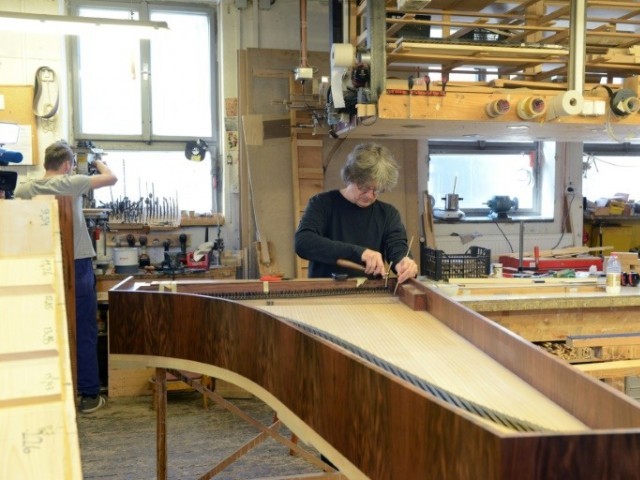 DIVISOV, CZECH REPUBLIC: The sign on the old sunlit house reads “Machine Factory” but now handiwork reigns in this workshop where replicas of fortepianos once played by the world’s greatest musical geniuses are created.

Since 1998, more than 200 copies of pianos played by Wolfgang Amadeus Mozart, Joseph Haydn or Frederic Chopin have left the house in the village of Divisov, some 40 kilometres (25 miles) southeast of the Czech capital, Prague.

“Authenticity. There can be no other purpose in replicating these instruments,” says their builder Paul McNulty, a 64-year-old American of Irish descent, whose small round glasses liken him to John Lennon.

“I want to raise no eyebrows if the original builder walks past my instrument,” he adds with a chuckle.

Italian Bartolomeo Cristofori invented the piano around 1700, and fortepianos were made until the 19th century, serving a number of Classicist and Romantic composers.

They were then replaced by the heavier modern piano with a metal frame.

McNulty first studied guitar, then switched to piano tuning before embarking on his career as a fortepiano builder at a Boston workshop.

“I got my degree and I went to this man and I said, ‘I’ll work for you for one dollar per hour’. He couldn’t say no. He showed me how to sharpen the blade and some osmosis happened,” says McNulty.

His entire house is packed with copies of pianos originally made by Johann Andreas Stein, Jean-Louis Boisselot or Mozart’s piano builder Anton Walter.

Concert: Classical styles of Europe, with a US stopover

McNulty moved to the Czech Republic in 1995 via the Netherlands, in search of quality spruce logs for his instruments.

“The Schwarzenberg forest in the Czech Sumava (mountains) is the original source” of wood for fortepiano makers in Vienna and elsewhere, says McNulty, who recently received Czech citizenship.

“I get the tree and I saw it up into eighths and they sit out in the garden for five or 10 years and then I slice it up on a saw into soundboard pieces,” he told AFP.

Besides the soundboard wood, McNulty uses iron strings, not steel, and the hammer heads are covered with the skin of hair sheep, an old breed with shorter hair than the thick wool of their modern cousins.

“I don’t use (modern) sheep because sheep have been bred out of resemblance to the sheep of the 18th century. They have more wool now so the skin texture has changed,” he says.

“In that period, hair sheep was used, and hair sheep always has been raised for the skin, that has not altered. So I’m using that. I buy them in Germany.”

“It’s detective work, you are honour-bound to trust the original design,” adds McNulty, who gets the insight he needs when existing original fortepianos are opened up, or from occasional old design sketches.

“When you are good in your observations and maybe you have some experience, you don’t make problems for yourself,” he said.

The former guitar and lute player confesses that he cannot play the piano, but he has a very capable tester at hand: his wife Viviana Sofronitsky, a fortepiano virtuoso and the daughter of acclaimed Russian pianist Vladimir Sofronitsky.

“I am not a romantic person and I thought I could not play romantic music, but then I started playing and I realised how beautiful and easy it is on this piano,” she says.

Sofronitsky once ordered a fortepiano from McNulty after playing one of his instruments at Harvard University, and when she came to pick it up from the workshop, she stayed.

“Paul is a genius. These instruments make music come alive, they allow people who don’t like classical music to suddenly discover the whole universe of it,” she told AFP.

His clients include virtuosos, universities, conservatories, or institutions such as the Fryderyk Chopin Institute in Warsaw, which recently bought a copy of Chopin’s fortepiano made by Fryderyk Buchholtz from McNulty.

“For me, Paul McNulty is the embodiment of the ideal master, who is summarising the makers from different epochs,” Russian pianist Alexei Lubimov once said.

“He is a master who is able to travel through time as if he had magic boots. He can go from Mozart’s era to Chopin’s, then from Brahms’s back to Beethoven.”

Rejecting any ideas of retirement — “ask me in 10 years!” — McNulty dreams of making a replica of a late Conrad Graf piano once owned by German composer Robert Schumann, and remains humble.

“I’m happy to be a stage assistant, that’s my function. Everything that happens in the kitchen, backstage, is just pure work, and you’re happy if you do a good job. So I’m happy in this way,” he says.