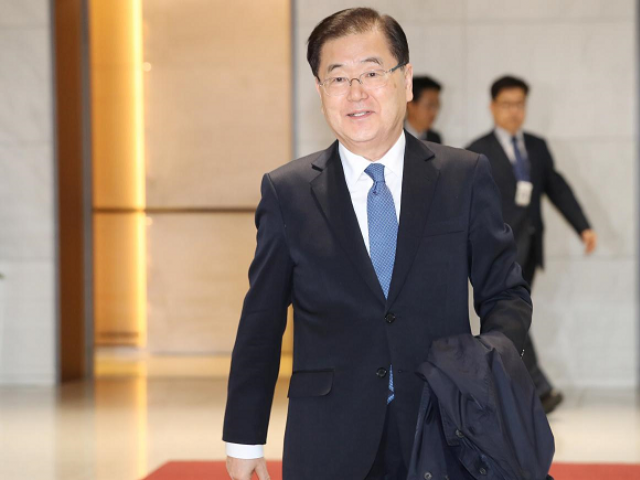 SEOUL: South Korea’s national security adviser has flown to Washington to meet his newly appointed US counterpart John Bolton, an official said Thursday in Seoul, where concerns are growing over the American’s hardline stance on the nuclear-armed North.

Chung is due to meet Bolton on Thursday, the official at the South’s presidential Blue House told reporters.

He added the meeting was a courtesy call aimed at “coordinating opinions ahead of the inter-Korean and US-North Korea summits”.
The rare inter-Korean summit is scheduled to take place in just over two weeks, while the second meeting between US President Donald Trump and Kim is expected as early as May.

The appointment this week of Bolton — a mustachioed former UN ambassador and strong defender of a US first strike option against North Korea — has raised concerns in Seoul over the prospects of the diplomatic thaw on the Korean peninsula.

Bolton’s stance on Pyongyang diverges sharply from the more dovish South Korean government, which had pushed hard for an early meeting with him, the South’s Yonhap agency reported.

“Bolton does not even mention the possibility of a peace treaty with Pyongyang” which is sought by the South, said Koo Kab-woo, a professor at the University of North Korean Studies in Seoul.

“If Bolton intervenes in the current diplomatic process (with North Korea), the need for coordination becomes much bigger,” Koo added.
In a growing rapprochement on the Korean peninsula kick-started by the South’s Winter Olympics, Kim is set to meet the South’s Moon Jae-in on April 27.

Trump has agreed to meet Kim to discuss denuclearisation as soon as next month, though no venue or specific date is agreed.

The South Korean embassy in Washington and the US State Department have agreed to set up a hotline in the build-up to the summits, Yonhap reported.

The South’s presidential office is also set to launch a new situation room to monitor the preparations for its upcoming summit on a daily basis, it said Thursday.

As Pompeo signals hard Russia line, lawmakers want him to stand on his own