Judges at fault for delay in justice providence: CJP

Judges at fault for delay in justice providence: CJP

‘We have to build a Pakist­an where our new genera­tion would get easy justic­e’
By Muhammad Zafar
Published: April 12, 2018
Tweet Email 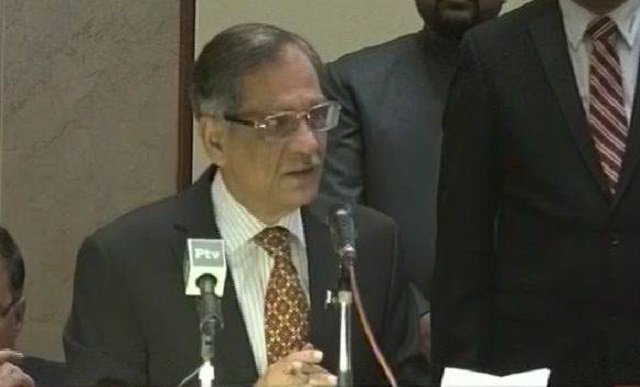 QUETTA: Chief Justice of Pakistan Justice Saqib Nisar said on Wednesday that judges would be held responsible for delays in providing justice to the masses as thousands of cases are pending in courts.

“People have been waiting for judgment on their cases for 30 to 40 years…if people are not getting justice despite knocking the door of honourable courts I think we all would be held responsible for these delays,” he said.

In a ceremony to hand over vehicles to judges of the Balochistan High Court, the CJP stressed upon the judges to use legal terms in providing convenient justice to the people.

“There was a time when judges would pass handwritten judgments and no one could have made changes. Today, many judges take decisions without applying basic legal rules,” said the CJP.

“Judges are the most important pillars of the judicial system. God has attached us to this profession which leads towards respect and forgiveness,” CJ Saqib Nisar added.

With regards to the legal reforms in the country, the CJP said, “We don’t have the power to change the legislation made during British rule in the subcontinent…we can provide easy justice and resolve hundreds of cases in a timely manner.”

Chief Justice of Pakistan said, “I urged you all to learn the legal complexities of our law because time has come that we all have to bring changes in our judicial system and it’s up to you (judges) to first bring positive change in your courts.”

He said judges should memorise the legal acts of the Pakistan Penal Code and should always have bunch books to bring legal reforms in the country, adding, “First we all have to learn and understand the law.”

With regard to the salaries and privileges of judges, the CJP said that they have been getting salaries through tax money collected from the common man, which makes them liable to provide relief through easy justice. “We have to build a Pakistan where our new generation would get easy justice.” CJP of Pakistan added.

A three-member bench of Supreme Court of Pakistan headed by Chief Justice Saqib Nisar on Wednesday ordered the Balochistan Police IG, deputy commissioner, and Qila Abdullah district DPO to arrest accused Din Muhammad Palawan and produce him before the court in 10 days.

Din Muhammad Palawan is accused of firing at the house of Obaidullah in Gulistan after pressuring him to marry his 10-year-old sister to him. The bench directed that police should provide full protection to the family of Obaidullah and take steps for the arrest of the accused.

Obaidullah, a resident of Gulistan in Qila Abdullah district, filed an application in the apex court pleading that an old man forcibly wanted to marry his 10-year-old sister. He added that last year, he opened fire at his house and said, “Your sister will be my wife and no one else can marry her.”

He further pleaded that he lodged FIR against the accused and his associates who are threatening him and his family, but the police have not arrested them.

Obaidullah said that due to the threats, his sister cannot go out of the house, which forced the family to leave their hometown and shift to Quetta. The girl also appeared before the apex court.

Judiciary is paralysed due to govt, says CJP

Inspector General of Balochistan Police Moazzam Jah Ansari, the deputy commissioner, and the Qila Abdullah DPO also appeared before the Supreme Court Quetta Registry. The DC informed the bench that action was taken for the arrest of the nominated accused, who is a truck driver, but he was not found at home. He further informed that negotiations were also held between both parties at the local level.

The investigation officer informed the court that four accused nominated in the case had been arrested, but they later got bail. He said that only one accused, Din Muhammad, is still an absconder.

Chief Justice Mian Saqib Nisar directed police to arrest the main accused within 10 days and provide protection to the family of the applicant. The next hearing of the cause would be held in Islamabad on April 23.