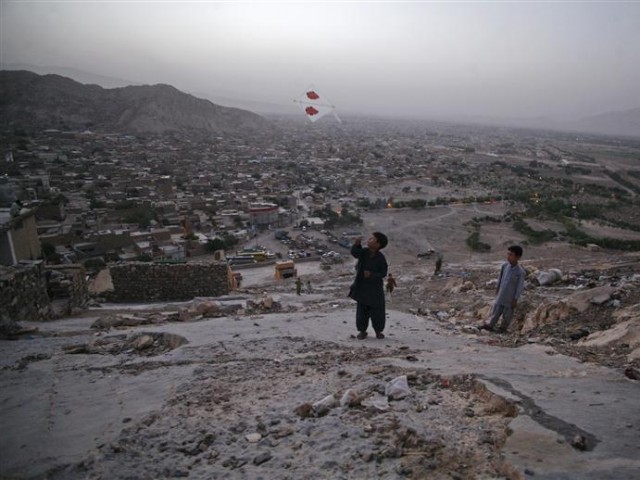 A boy from the Hazara community flies a kite on a hilltop overlooking houses in Mehrabad, Quetta on August 29, 2012. PHOTO: REUTERS

QUETTA  : The Hazara Democratic Party (HDP) has expressed reservations over the new delimitation of constituencies, saying it will particularly affect the people of Murryabad and Hazara Town.

Talking to The Express Tribune, a spokesperson for the party said that ‘hasty’ work by the charge circle led to an overlap of constituencies while the census estimates clearly underrepresented the voters of the region to which objections had also been filed.

He said the authorities did not consider proposals from the political parties while carrying out the delimitation work. “Delimitation of constituencies should not be made in the light of unofficial results [of census],” he demanded.

Citing examples on overlapping of constituencies, he said, “PP-88 has been illegitimately classified under PP-29 which is in clear violation of ECP rules. Section 10 of the charge circle clearly states that a constituency cannot be delisted.”

According to the HDP spokesperson, after removal from PP-6, PP-29 has been included in Siragai, Zarkho and Hana, giving no consideration to the charge circle. The constituency should have been from North to Kachlak. Nowakali is in North while Shaikhmanda has also been kept under PP-26.

“During the 2013 elections, Murryabad had 43,600 registered voters while now the count has increased to just 51,274,” he said, terming the delimitation exercise ‘an act of deprivation’ for the people of Murryabad.

“In 1997, estimated population of Hazara Town was 210,000 which has now been calculated as 11,50,000,” the spokesman said, adding that the number of wards in Murryabad was only eight while Hazara Town had only one councillor for its 110,000 people.

He said his party was concerned about the new delimitations for which legal action was under consideration.

Killing of civilians a ‘govt failure’