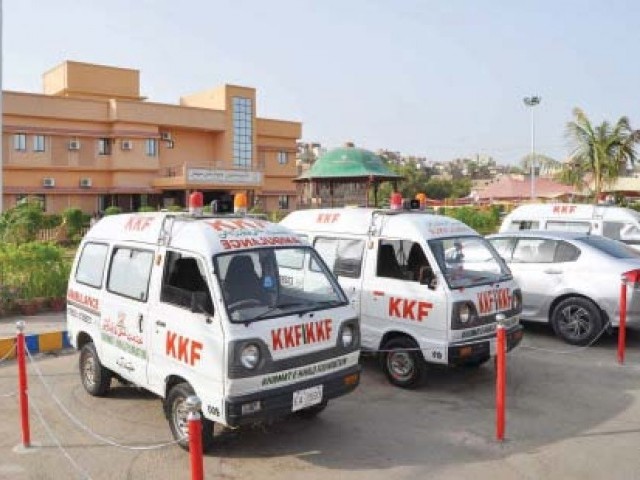 Ambulances of the Khidmat-e-Khalq Foundation parked outside the hospital. PHOTO: EXPRESS

“Provincial government, especially the health sector, is trying its best to solve the problems facing the patients at government hospitals… and in this effort, charitable organisations are also playing an effective role,” said Abro while talking at a ceremony where the Khidmat-e-Khalq Foundation (KKF) donated 10 wheelchairs to Sindeman Civil Hospital and Health Secretary Nasir Saleh.

He commended the KKF work in the health sector. “We wish to provide best health care facilities in every civil hospital,” he added.

Speaking at the ceremony, the health secretary said the accommodation in the Civil Hospital’s mortuary had been increased to 50.

He said that on issues related to the operation theatre and provision of drinking water, “we have requested the Khidmat-e-Khalq Fondation which has assures us to do the needful soon”.

KKF Chairman Naimat Zuhair said the cost of a wheelchair is Rs10,000 and at least 10 were being donated to MS Civil Hospital Shahjehan Panizai.

“I say just ‘send us a demand letter’ about all the things required at the Civil Hospital, and we will provide them,” he said.

Later, he distributed 10 wheelchairs to the MS Civil Hospital in the presence of the minister and the secretary health.

PM Abbasi must have begged CJP to ‘save’ Nawaz Sharif, says Imran