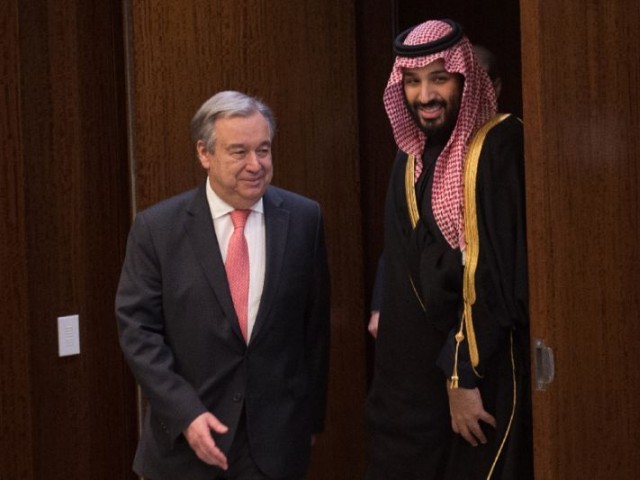 UNITED NATIONS: Saudi Arabia on Tuesday presented a $930 million cheque to the UN for humanitarian aid in Yemen as the UN chief pushed for an end to the war in which Riyadh leads a military coalition.

United Nations Secretary-General Antonio Guterres thanked Crown Prince Mohammed bin Salman for the contribution, but stressed that the war in Yemen requires a political solution, and not just a humanitarian response.

“There is no humanitarian solution for humanitarian problems,” Guterres said after receiving the check, which also came from the United Arab Emirates.

Here’s what Washington should do about Yemen

The Emirates plays a major role in the coalition, which intervened militarily three years ago to support Yemen’s government against Iran-backed Houthi rebels.

Civilian casualties from coalition air strikes have drawn criticism from rights groups, and in October the UN placed the alliance on a “blacklist” for killing and maiming children.

“The solution is political and we are entirely at your disposal to work to find a solution” that will “end the suffering in Yemen,” Guterres said.

The United Nations is making a fresh push for peace talks in Yemen, where the coalition acted to support the internationally-recognized government after the Houthis seized the capital.

The UN calls it the world’s worst humanitarian crisis, with 22.2 million people in need of aid, a growing risk of famine, and a severe outbreak of cholera.

It was the second meeting between the UN chief and the crown prince, who has bristled at Guterres’ description of Yemen as a “stupid war” that is harming the interests of the countries involved.

Prince Mohammed said Saudi Arabia was working to uphold UN principles which he said meant “not interfering in the affairs of other countries,” an apparent reference to Iran’s support for the Houthis.

“We try as much as we can to solve the problems of the Middle East politically and if things get out of control, we try as hard as we can to avoid all the other impacts,” said the crown prince, speaking through a translator.

“We will continue to comply, as we always have, with international law,” he said.

The UN chief has appointed a new peace envoy, Martin Griffiths, who was in the rebel-held capital Sanaa this week for talks on kick-starting the political process, following a first round of meetings in Riyadh.

UN diplomats believe the new effort could succeed because Iran has sent signals that it is willing to pressure the Houthis to seek a settlement.

Guterres on Tuesday will travel to Geneva for a donors’ conference hosted by Switzerland and Sweden to raise funds for Yemen.