‘Only politicians should be allowed to engage in politics’

‘Only politicians should be allowed to engage in politics’ 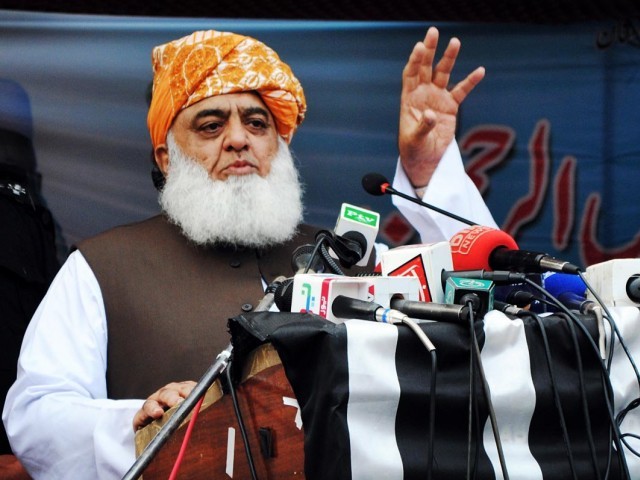 HYDERABAD: Speaking at a large public meeting of his party in Benazirabad district on Friday, Muttahida Majlis-e-Amal’s leader and chief of Jamaat-e-Ulema-e-Islam-Fazl (JUI-F) Fazlur Rehman justified criticism of judges. “If the judges instead of the judgments speak, they will have to tolerate criticism from politicians,” Fazl said while addressing the Babul Islam Conference at the SRTC ground in Nawabshah taluka.

He contended that if all institutions worked within their constitutional limits, the situation of a conflict between the institutions will never develop. “Only politicians should be allowed to [engage in] politics.”

He criticised political parties seeking power for taking their disputes to courts, which consequently are being dragged into settling political matters. “Today our institutions have been politicised,” he argued.

Fazl said the powers politicising the contentious issues of nationalism, regionalism and ethnicity are creating internal rifts among people of Pakistan. He also accused the rulers of conspiring together to engender sectarian conflicts among the religious parties to create a split because it served their interests.

The JUI-F chief reiterated his commitment to liberating the people of Pakistan from the tyranny of feudal lords, tribal chiefs, Khans and Nawabs. He criticised the Pakistan Peoples Party, saying contrary to the party’s slogan of providing food, shelter and clothing to all, it has deprived the poor people of eating two meals a day. “In the upcoming [general] elections, the people will have to decide whether they will vote for religious parties or secular ones.”

He claimed that conspiracies against the finality of prophet-hood and blasphemy laws are being hatched on a global level. “The liberal lobbies are employing non-governmental organisations to influence the law-making assemblies under this conspiracy,” he claimed.

Fazl claimed that after the creation of Pakistan, authority was handed over to the people who were loyal to the British and American rulers. The global powers want to keep the religious parties in Islamic countries away from power and the ulema are always subjected to character assassination, he added. “The Western powers want an Islam that allows liquor, usury, dance, music and obscenity in the name of culture,” he claimed.