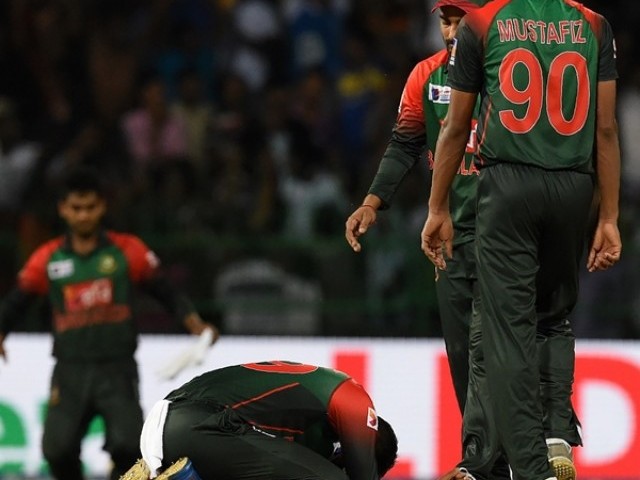 NEARLY THERE: Bangladesh pushed their illustrious neighbours India all the way in Sunday's final before Dinesh Karthik smashed a six off the last ball to secure a four-wicket win. PHOTO: AFP

COLOMBO: India captain Rohit Sharma praised Bangladesh for their “fearless cricket” after the T20I minnows came within a ball of a shock victory in the tri-series final in Colombo.

Tenth-ranked Bangladesh pushed their illustrious neighbours all the way in Sunday’s final before wicketkeeper-batsman Dinesh Karthik smashed a six off the last ball to secure a four-wicket win.

Karthik’s eight-ball 29 took India over the line after a tense 167-run chase that saw Bangladesh concede 35 runs off the final two overs at the R. Premadasa Stadium.

But Sharma, who gave his team a blazing start with a 42-ball 56, said Bangladesh were a “very good team” who have vastly improved over the past three years.

“(Bangladesh) play fearless cricket, it’s always good. Sometimes, it can bite you when things don’t go your way but that is the style of cricket they want to play,” Sharma told reporters after the final. “They are certainly a very good team… in the last three years, we’ve seen how they’ve changed their style of cricket. A few of the guys who are experienced are nurturing the younger guys.”

Kohli not taking his cricket talent for granted

Bangladesh’s Rubel Hossain, who sent down the 19th over in the final that conceded 22 runs, and Soumya Sarkar, who was entrusted with the final six balls which went for 13, were the unfortunate bowlers on the receiving end of Karthik’s explosive innings.

But Sharma had comforting words for Soumya, an occasional medium-pace bowler, after his final ball disappeared for six as Karthik took India to 168 for 6.

Soumya conceded just seven runs from his first four deliveries and then had Vijay Shankar caught at long-on with the fifth, leaving India needing five runs.

But his wide half-volley was drilled over the extra cover rope by Karthik as the India dressing room erupted in wild celebrations.

“We always knew Soumya Sarkar is not a premier bowler. He’s a part-time bowler at the most,” said Sharma. “It can happen to anyone when you bowl those big overs. It’s never easy at the death. The pressure is always on the bowler not the batsman.”

Shakib also lauded the performance of his team, who have never won a T20 match against India in eight meetings so far and have also lost 11 of their last 14 games in the shortest format.

“We were very close but in the end India was on the winning side. Credit goes to them but we cannot take anything away from us for the way we played throughout this tournament,” said Shakib. “We have showed some good character and played the game in the right spirit and I cannot ask more than that from my team,” the all-rounder added.