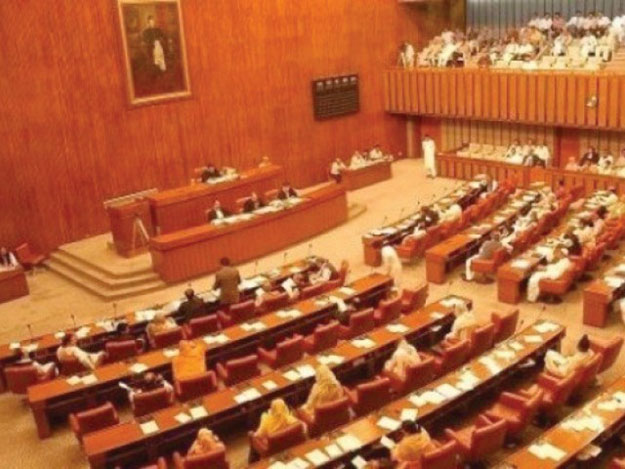 Election of the senators has drawn attention to the role of wealth and family connections in the polls. PHOTO: EXPRESS

ISLAMABAD: Pakistan Tehreek-e-Insaf (PTI) leader who played the role of the mediator between the opposition parties for chairman and deputy chairman elections has claimed that he still have a text message of senior PPP leader Dr Qayyum Soomro in which he assured PTI would be given slot of opposition leader in return of its support for deputy chairman Senate.

PTI had voted in the favour of Pakistan Peoples Party’s (PPP) nominee for the Senate deputy chairman after having an assurance from the PPP and a group of independent senators from Balochistan that they would support PTI’s candidate for the Leader of Opposition in the upper house.

“After this deal with the PPP, the PTI guaranteed that all its 12 senators will vote for Mandviwalla. PTI had its doubt that despite a decision in this regard some two of its senators may not vote for deputy chairman. But CM Khattak and I personally met with those two senators to make sure that they follow party line in this matter,” the PTI leader exclusively told The Express Tribune and requested anonymity.

PTI nominee for the opposition leader in Senate Azam Swati on Saturday during a press conference vehemently rejected the claim of any deal between the PTI and PPP.  However, he admitted that PTI only had a verbal commitment from independent senators from Baluchistan for Senate Leader of Opposition.

“PTI had no agreement with the PPP. We had an agreement with independent senators from Baluchistan that they will support PTI’s candidate for the office of opposition leader in return of our support for Senate Chairman Sadiq Sanjrani,” Azam Swati claimed.

Swati rejected the claim of any deal with the PPP and said that he had contacted Qayoom Soomro on March 13 and agreed on a proposal that soon after the election of chairman and deputy chairman, all opposition parties would sit together and talk about a unanimous candidate for opposition leader in the House. However, Swati said, “Instead of commitment, the PPP without consultation with the opposition parties silently fielded its candidate for the office in an unlawful manner.”

“It’s our due right being second largest opposition party in the Senate to be considered for opposition leader, since Baluchistan senators and PPP had already been given chairman and deputy chairman office,” Swati added.

In an interview with a private television channel on Saturday evening, Dr Soomro confirmed that 10 to 12 PTI MPAs from Khyber Pakhtunkhwa voted for PPP candidate for Senate and said that they had a commitment from independent senators from Baluchistan that they would support PPP’s nominee for the office of opposition leader in return of PPP’s support for chairman Senate Sadiq Sanjrani instead of PTI. The nomination papers bearing signatures of 33 senators submitted by PPP’s Sherry Rehman also has signatures of five independent senators from Baluchistan.

Swati said that PPP had also violated rule 15 of the Senate rules, which provides that process of receiving signatures would only be initiated once the independent senators announce their decision of joining opposition of treasury benches in House, “an exercise currently in progress.” He said, “Letter written by Sherry Rehman to Chairman Senate is extralegal and senators from FATA have yet to decide their affiliations.”

Swati hopes that independent senators from FATA and Baluchistan, MQM and JI would support him for the slot and added, “PTI wants to go on with the unity expressed by opposition at the time of elections of chairman and deputy chairman and it can continue if opposition now supports PTI for opposition leader.” He said that PTI would give a surprise in this regard till Monday afternoon.

To a question about caretaker setup, PTI spokesperson Fawad Chaudhry who was also present in press conference informed that leader of the opposition in National Assembly Syed Khurshid Shah had contacted PTI and PTI would soon submit its nominations for the caretaker Prime Minister and Chief Minister to the opposition leader.

Women doctors use technology to bring healthcare to rural Pakistan