When Saddam gassed 5,000 Kurds at Halabja

When Saddam gassed 5,000 Kurds at Halabja

The town is the victim of a chemic­al weapon attack­
By AFP
Published: March 14, 2018
Tweet Email 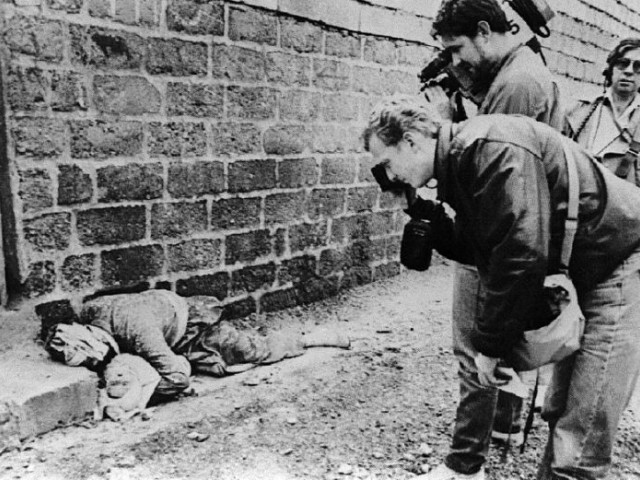 The town is the victim of a chemical weapon attack PHOTO:AFP

HALABJA, IRAQ: On March 16, 1988, as many as 5,000 Iraqi Kurds, mostly women and children, were killed when deadly gas was released on the northern town of Halabja by Saddam Hussein’s forces.

AFP remembers the massacre, believed to have been the worst-ever gas attack targeting civilians. In the final months of the eight-year Iraq-Iran war, ethnic Kurdish fighters who sided with Iran capture the large farming town of Halabja in Iraq on March 15.

Home to more than 40,000 people, the town is in the Kurdistan region and just 11 kilometres (seven miles) from the Iran border, while 250 kilometres from the Iraqi capital.

Saddam’s army retaliates with artillery and air strikes. The Kurdish fighters and most of the town’s men withdraw to surrounding hills, leaving behind the children, women and elderly.

The following day, Iraqi fighter planes circle above the area for five hours, releasing a mixture of toxic gases.

The slaughter is quickly revealed: the fighters who come down from the hills give the alert and foreign journalists are soon on the scene.
By March 23, the first images are broadcast on Iranian television.

Corpses scatter the streets with no obvious sign of injury, although witnesses say later some had blood around their noses.

The cameras of journalists brought in by the Iranian army linger on the bodies of the children. The town is the victim of a chemical weapon attack, say the commentaries, using official Iranian explanations that accuse Iraq of responsibility.

A Belgian-Dutch team from Medecins Sans Frontieres (MSF), the first foreign medical mission to reach Halabja, confirms the use of mustard gas and probably of cyanide.

“Our conclusion is clear: the civilian population was gassed,” it says.
An AFP special envoy, Michel Leclerq, describes the horror in a story filed on April 1.

“Not the slightest stir, not a cry, not a movement: Halabja … seems frozen, immobilised in a deep sleep, while canons thunder in the distance,” the report says.

The “houses remain standing, the stores are full” but “no soul lives here since Iraqi planes released their deadly poison”.
Many of the thousands who fled are in camps in Iran.

A French MSF team estimates the number of dead at 2,000-3,000. Teheran gives a toll of 5,000. A Belgian toxicologist says in May that analysis shows that several gases were used including mustard gas and nerve agents.

He estimates that 3,800 people were killed and 10,000 poisoned.
Analysts say afterwards the attack may have been in revenge for the Kurdish fighters’ support of the Iranian army in the 1980-1988 war.
Justice comes more than 20 years later when General Ali Hassan al-Majid, known as “Chemical Ali” for ordering poisonous gas attacks, is hanged in 2010.

A cousin of Saddam, he is found by the courts to have ordered the attack on Halabja.

He gets four death sentences, including for Halabja, but insists he acted in the interests of Iraqi security and expresses no remorse.
In 2012, the Iraqi government hands Halabja authorities the rope used in his hanging.

Saddam is hanged in 2006 for another atrocity, closing various investigations under away against him, including for genocide of the Kurds.

Foreign Policy magazine reveals in 2013 that the United States provided Iraq with intelligence on preparations for an Iranian offensive during the war knowing Baghdad would respond with chemical weapons.

“The Iraqis never told us that they intended to use nerve gas. They didn’t have to. We already knew,” said retired Air Force colonel Rick Francona, a military attache in Baghdad during the 1988 attack.