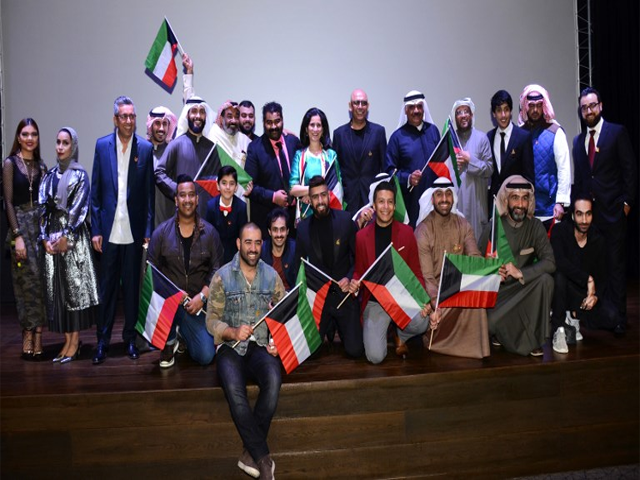 Sheikha Intisar Salem al-Ali Al-Sabah (C), Kuwaiti film producer of "Swarm of Doves", the first feature-length film about the 1990 invasion Iraqi invasion of the Gulf state, poses for a picture with the film in Kuwait City on February 20. PHOTO: AFP

KUWAIT: Kuwaiti cinemas on Thursday will launch public screenings of “Swarm of Doves”, the Gulf state’s first feature length film about the 1990 invasion of the Gulf state by Saddam Hussein’s Iraq.

The film is “inspired by true events” that occurred during the seven month occupation, producer Sheikha Intisar Salem al Ali Al Sabah told  during a screening for the press.

“These are stories of people who defended Kuwait at that time,” Sabah said.

She said “the aim of the film is not to create any grudge but to highlight the brotherhood, tolerance and unity Kuwaitis experienced during the invasion”.

The film, directed by Ramadan Khasrouh and on the festival circuit since 2017, highlights moments of humanity that transcended the conflict between Iraq and its tiny, oil rich neighbour.

In one scene, an Iraqi soldier is ordered by his commander to kill a Kuwaiti but he refuses after remembering words from his father during childhood about the bonds between the Kuwaiti and Iraqi people.

Saudi Arabia aims to be A-rated country for entertainment, tourism

Another scene shows a Kuwaiti resistance fighter who forgives an Iraqi soldier during an armed confrontation, prompting the soldier to offer the man an escape from the army siege around his house.

“The film does not bear any ill will to the Iraqi people,” actor Daoud Hussein.

“The director and screenwriter made sure this film doesn’t put salt on the wound,” said Hussein, who plays the film’s protagonist resisting the invasion.

Kuwait earlier this month hosted an international conference for the reconstruction of Iraq, which is reeling from a three year war to defeat the Islamic State jihadist group.

The conference succeeded in raising $30 billion in loans, investment and financing for Baghdad to begin the gargantuan task of rebuilding.

Kuwait’s deputy foreign minister, Khaled al Jarallah, said his country had overcome “past wounds” and had a “moral, humanitarian and Arab” duty to support its neighbour.