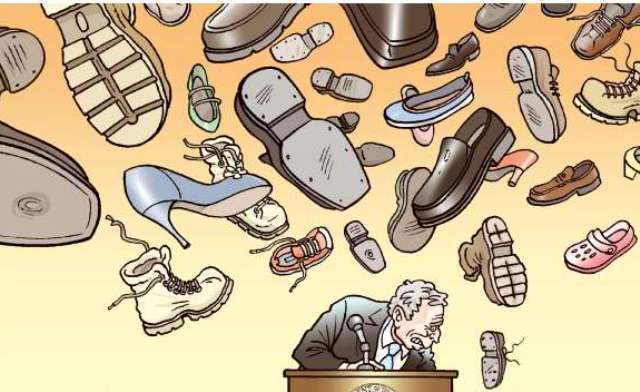 KARACHI: With the latest incident of shoe hurling at former Prime Minister of Pakistan Nawaz Sharif, a number of instances have occurred in the past where politicians have been hit with various things.

Here’s how it all happened:

Sharif was invited to address a ceremony to mark the death anniversary of slain religious scholar Sarfaraz Naeemi at Jamia Naeemia in Lahore. Just as Sharif got to the podium, a man, later identified as ‘Falki’, hurled a shoe towards him, which landed reasonably far away from Sharif.

Moments later, another man, reportedly identified as Munawar, tossed his shoe towards Sharif. The shoe hit him in the chest before bouncing into his neck and cheek. Immediately afterwards, the man stepped up on the stage chanting a religious slogan.

A man was beaten up and handed over to police for allegedly trying to hurl a shoe at Pakistan Tehreeke-e-Insaf (PTI) chief Imran Khan as he was getting into his vehicle to leave the venue for a political rally he addressed in Faisalabad.

The suspect was caught by the party workers and Khan’s security staff as he allegedly attempted to open door of the PTI chief’s vehicle. He was handed over to police before being beaten up badly.

A man lobbed a shoe at Interior Minister Ahsan Iqbal while he was addressing a workers’ convention in Narowal.

Media reports suggest that the man, identified as Bilal Haris, tried to get closer to the minister as soon as he arrived on the stage in Aliabad to address Pakistan Muslim-League-Nawaz (PML-N) supporters.

He then hurled a shoe at Iqbal, which reportedly ‘touched his arm’. The party’s workers soon got hold of the man and handed him over to police.

Rashid was in Lahore to attend the final of Pakistan Super League. In his address to the media, the shoe struck him.

Sharif hit with shoe at memorial event in Lahore

Former Federal Minister of Information and Broadcasting Pervaiz Rasheed was hit with a shoe at passengers lounge at Karachi airport. Rasheed stood up from his seat and tried to move out of the scene. Amid all this, an unidentified person from the mob threw shoe at him which hit him on his head.

Punjab chief minister Shehbaz Sharif narrowly escaped a shoe lobbed at him during the inauguration of a three-day South Asia Labour Conference in Lahore.

The shoe-hurler turned out to be a journalist who aimed the shoe at Shahbaz but missed his target. The shoe landed near the stage instead where the CM was sitting.

An irate lawyer lobbed a shoe at former dictator Pervez Musharraf as he attempted to enter a court in Karachi.

Musharraf was not hit by the flying footwear, which is believed to have been thrown as the former president was walking through the court building surrounded by security guards, supporters and journalists.

Angry protesters hurled abuse at Arbab Ghulam Rahim, former chief minister of Sindh and slapped him with a shoe as he came out of a provincial assembly.

A man used a shoe to beat Arbab Ghulam Rahim, who belonged to pro-Musharraf party, the Pakistan Muslim League, as he left the provincial assembly after being sworn in.

In November 2009 Former Australian Prime Minister John Howard was delivering a speech about leadership in the new century at Cambridge University when an Australian student called him a racist before taking off his boot and throwing it at him. It did not hit Mr Howard.

During a press conference at the Prime Minister’s Palace in Baghdad in 2008, Iraq, journalist Muntadhar al-Zaidi threw his shoes at then US President George W. Bush. “This is a farewell kiss from the Iraqi people, you dog!” yelled al-Zaidi in Arabic as he threw his first shoe towards the US president. He threw his second shoe, yelling: “This is for the widows and orphans and all those killed in Iraq!”

Neither shoe found their target.

In 2009, a 28-year-old man threw a shoe at the Indian Prime Minister. The shoe landed a few metres away from Singh. Soon after the incident took place, the shoe thrower was taken away by police. The shoe-thrower faced no charges at the request of Mr Singh.

The person obviously did not think Mrs Clinton was a shoe-in for President. She dodged the projectile and managed to joke about it.

A woman who hit Venezuelan President Nicolás Maduro on the head with a mango was promised a new house for her troubles in a surreal tropical tale that went viral in Venezuela. The 52-year-old president was driving a bus through a crowd in the central state of Aragua when the fruit was thrown at him. He also promised that he would eat the mango.

Foreign minister Khawaja Asif had ink thrown at him during a PML-N workers’ convention in Sialkot. Asif was addressing his party workers when an unidentified man doused him with black ink from behind. PML-N activists roughed up the ink-thrower before handing him over to the police.

Back in 2012, then presidential candidate Romney was campaigning across the country, and getting glitter dumped on him along the way.

As Romney “walked to the stage inside a warehouse here, a gay rights activist who said he was from the group ‘Glitterati’ threw a cup of glitter on the former Massachusetts governor. The glitter poured over his hair, stuck to his face and shimmered from his navy blazer.”

Former Pennsylvania Republican senator got glitter treatment many times. The man had come in third in the South Carolina primary in 2012. He was autographing posters and greeting supporters when protesters showed up out of nowhere and threw a bunch of glitter in his face.

The former Minnesota congresswoman and 2012 presidential candidate had wrapped up a 40-minute speech in Minneapolis in 2011 and was exiting the stage when a bunch of glitter was thrown in her way.

The former Minnesota governor and GOP presidential candidate was hanging out in San Francisco when he had a bunch of confetti dumped on him by Code Pink activists.

The former House Speaker and then GOP presidential candidate was at book signing in Minnesota with his wife, Callista, in 2011. A man came up to the table “dumped a cracker box full of colorful confetti on the pair and said, ‘Feel the rainbow, Newt! Stop the hate! Stop anti-gay politics!’

Andrew Joseph Alemao, 28, was arrested and charged with disorderly conduct for the tomato-throwing incident at Donald Trump. It seems multiple tomatoes were lobbed at the controversial presidential candidate – but only one found any kind of mark, the wall. Sadly for the projectile-thrower, none hit Trump.

Two tomatoes were thrown at Sarah Palin in 2009. One missed its mark – but the other hit a police officer, which was a sure-fire way to get arrested.

The former Labour leader didn’t have this thrown at him, but it was instead smacked onto his suit. Surprisingly, he dealt with it in a rather suave way after the initial shock, flashing a winning smile after an aide removed his jacket.

The former UK Prime Minister faced a shoeing with added eggs at a signing for his book in Dublin, during a pelting by anti-war protesters.