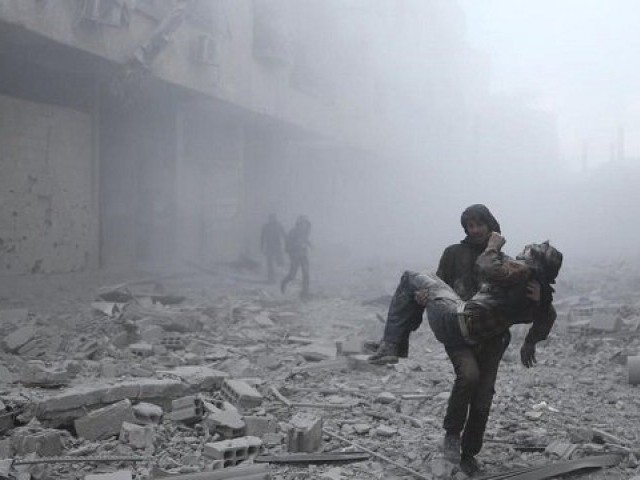 BEIRUT: Syria’s conflict has killed more than 350,000 people, uprooted more than half the population and left much of the country in ruins since it erupted seven years ago.

Here are some key statistics:

The Britain-based Syrian Observatory for Human Rights says it has recorded the deaths of 353,935 people since the conflict began with anti-government protests in March 2011.

Civilian suffering worse than ever in 7-year Syria war: UN

In a country with a pre-war population of 23 million, the United Nations estimates that 6.1 million people have been internally displaced by the fighting.

Handicap International, a French non-governmental organisation, says one million people have been wounded in the war.

The war has forced 5.4 million people to flee Syria, according to the UNHCR.

In Jordan, where the UNHCR says it has registered 657,000 Syrians, the government says it is hosting 1.3 million.

In 2017, Amnesty International said Syrian authorities hanged around 13,000 people between 2011 and 2015 at the infamous Saydnaya prison near Damascus.

It said a further 17,700 people had died in custody since the conflict began.

The Observatory says at least 60,000 people have died from torture or harsh conditions in regime prisons since 2011.

The monitor says half a million people have spent time in regime jails since the start of the conflict.

Several thousand have died over the same period in prisons run by jihadists or other rebels, it says.

Analysts say the conflict has set Syria’s economy back by three decades and devastated its infrastructure.

The education and health systems are in ruins.

With oil production at its lowest in years, a total halt in phosphate exports and power generation sharply reduced, Syria’s economy is on its knees, according to government ministers.

In a July 2017 report on the economic and social consequences of the conflict, the World Bank estimated the cumulative losses in GDP at $226 billion, about four times the Syrian GDP in 2010.

The World Bank said of the cities taken into account in the report, 27 percent of the housing stock had been damaged, with seven percent of that destroyed and around half the medical and education facilities.

“Some 13.1 million people in Syria require humanitarian assistance … with 69 per cent of the population estimated to be living in extreme poverty”, the UN Office for the Coordination of Humanitarian Aid (OCHA) said in 2017.

It reported 2.98 million people in hard-to-reach areas, including 419,000 in UN-declared besieged areas.

In March 2018 the UN condemned “the deliberate starvation of civilians as a method of warfare” following the publication of shocking images of severely malnourished children in the rebel enclave of Eastern Ghouta.

On February 18, the regime launched a ferocious assault on the enclave where 400,000 inhabitants have lived under government siege since 2013.