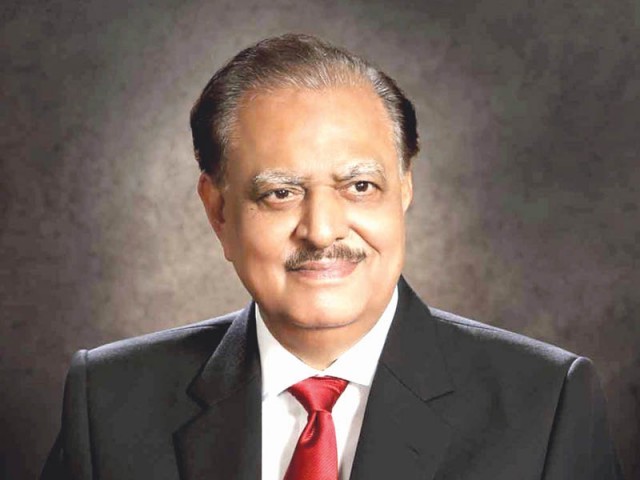 Addressing the concluding ceremony of Sibi Festival on Sunday, the president advised the Balochistan government to formulate a comprehensive policy to train the youngsters in the fields of sailing, its allied professions, modern banking, business techniques as well as hospitality of foreign tourists.

The ceremony was attended by Balochistan Governor Muhammad Khan Achakzai, Provincial Livestock Minister Agha Syed Muhammad Raza, Local Government Minister Ghulam Dastgir Badini, besides huge number of industrialists, businessmen and hundreds of youngsters.
The Sibi Festival is a centuries-old event held to welcome the spring season. The event features folk cultural performances, setting up stalls, display of handicrafts and cattle shows.
Addressing the ceremony, the president said the event had become popular across the country as it brought joy to the people.

He said Pakistan, particularly Balochistan, had faced many years of ordeal due to poor law and order situation but the brave people of Balochistan remained steadfast and optimistic. But now, the sacrifices of the Baloch people had come to fruition as peace had been restored and the forces of peace were gaining strength, he added.

The president urged the people to unite for peace and development of the province so that they could leave behind a safe and prosperous Pakistan for generations to come.

He told the Baloch people to be ready to exploit the numerous opportunities to be brought by the CPEC as they had a major responsibility to make the project a success.

President Mamnoon said, “The dream of converting CPEC into a reality demands national unity by putting aside petty differences.”

He also ruled out rumours of any changes to the CPEC route and assured the people that the project was being executed as per the basic design.
He said besides bringing closer to each other, the CPEC would also help uplift the backward areas of both Pakistan and China.
President Mamnoon said the people of Balochistan and all the backward areas would benefit from CPEC, adding that it was an undeniable fact that people of the province had the foremost right over the CPEC that would be protected.

He told the gathering that he had allocated a huge chunk of President House funds for establishment of a National University of Modern Languages (NUML) campus in Gwadar to teach Chinese language to the youth.

He also lauded the multiple performances by the youth and the role of concerned departments to enrich the beauty of the event.

“Federal projects of energy can be completed in a few months which will help overcome energy shortages and end load shedding in the province,” he added. He said such historic festivals were the main resources through which economic activity could be increased in the area.

Earlier, LG and rural development minister presented a traditional Balochi turban to the president and the Balochistan governor.