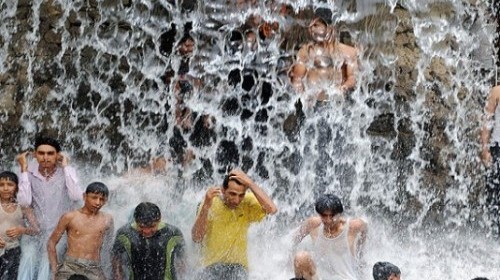 The provincial capital on Wednesday received the highest maximum temperature in the current summer season as the mercury touched 47 degrees celsius and day remained very hot and dry.

Meanwhile, the local meteorological department forecasted mainly hot and dry weather with chances of dust raising winds in Lahore during the next 24 hours.

Weather experts said that mainly hot and dry weather is expected over most parts of the country, however, isolated thunderstorm or rain is likely to occur over Hazara, Malakand, Rawalpindi, Gilgit-Baltistan and Kashmir.

The city temperature recorded at maximum 47 and minimum 30 degrees celsius while relative humidity remained at 18 per cent in the morning at 8:00 am and 10 per cent in the evening at 5:00 pm.

The highest maximum temperature in Pakistan was recorded 53.5 degrees in Mohen jo Daro and 50.5 in Noor Pur Thal (Punjab).


The met office has predicted rainfall in various parts of the country along with wind storms this evening, which is hoped will dampen the heat wave.

Chief Metreologist Riaz Ahmed told Express that the rainfall will bring some relief for the people in Punjab which has been engulfed in a heat wave, with temperatures soaring over 40 degrees celsius.

In Balochistan, weather is likely to remain hot for the next few days.

On the other hand, Pakistan Electric Power Company (Pepco) said that electricity shortfall has mounted to 3,735 megawatts with increasing mercury level.

Sources in PEPCO said that the demand has surpassed the production target with electricity generation estimated at 12,580 megawatts.

Owing to this shortfall, the supply to Karachi Electric Supply Company (KESC) has been reduced from 700 megawatts to 570 megawatts. 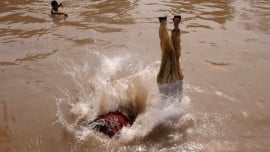 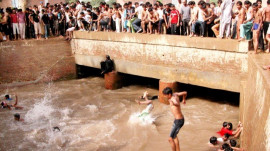 No respite from power outages as country sizzles 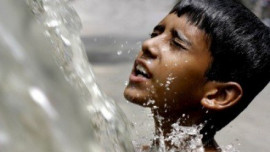 No end to loadshedding, as heatwave continues

Tanzeel | 10 years ago | Reply Apparently nothing seems to be 'cool' in this country!
Replying to X
Saved ! Your comment will be displayed after the approval.
Error !
Error! Invalid Email.