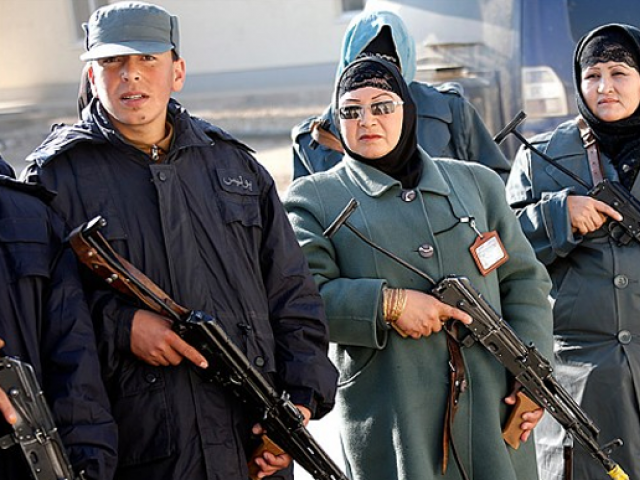 KANDAHAR: Shokria Jan, a female police officer in southern Afghanistan, is in a small force of women operating in one of the world’s most conservative societies and difficult security environments.

Working in the Taliban heartland of Kandahar province, she faces not just danger from insurgent attacks but also heavy pressure from a society in which many believe that women have no place outside the home, let alone in the security forces.

International Women’s Day has been marked in Afghanistan by official speeches and declarations from leaders including President Ashraf Ghani.

But for women like Shokria Jan, the challenges go beyond hopeful words. A widow and a mother of four, she is her family’s only breadwinner after her husband, also a police officer, was killed while on duty.

No less than men : Female cops equal to all tasks

“The Taliban ambushed and killed my husband who was serving in police uniform,” she said.

“After that, I decided to join the police to earn an income for my four kids as well as to contribute in serving my country. So now I’m serving in the police, the same as my husband.”

Getting more women into the Afghan security forces has been a priority for Ghani’s Western-backed government but it has not proved easy, and training facilities for women are limited.

As part of the Afghan National Police strategy, the government intends to recruit an additional 5,000 female police officers over the coming five years. Last year, 190 women were sent to Turkey for training.

Commanders say that female officers play an essential role in areas where men cannot go and in interactions with women at checkpoints. There are now around 110 female officers serving in Kandahar, in locations including the city airport.

“In the past, we did not have female police and we had lots of problems, especially in house searches and similar operations,” said Abdul Baqi, a local police commander in Kandahar.

For a monthly salary of less than $200, Shokria Jan talks to women, who in the conservative society of southern Afghanistan cannot normally speak to men outside their family. She also conducts the body searches – on women – that have long become part of everyday life for Afghans.

It is an often thankless job but one which she says is more than just a way to earn a living and feed her children.

“I feel I am serving Afghanistan,” she said.