Oil explor­ation and produc­tion compan­ies have failed to honour a commit­ment to pay Rs6 billio­n tax dues by the end of...
Published: May 27, 2010
Tweet Email 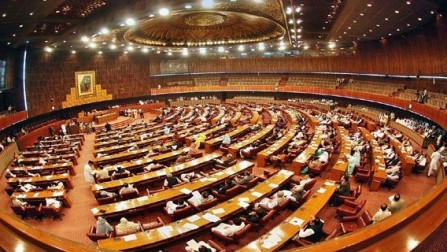 The National Assembly Standing Committee handed over 873 parliamentarians' degrees to the HEC for verification.

ISLAMABAD: Oil exploration and production companies have failed to honour a commitment to pay Rs6 billion tax dues by the end of March, forcing authorities to scrap a deal with these companies which may again trigger a legal battle.

Federal Board of Revenue Chairman Sohail Ahmad, while talking to reporters after a meeting of the National Assembly Standing Committee on Finance, said that the Memorandum of Understanding (MoU) signed between the FBR and the oil exploration and production companies did not have any legal base, as the companies did not meet the primary condition of depositing up to Rs6 billion by March 31.

The MoU was signed a few months ago aimed at resolving a Rs14 billion tax dispute through out-of-court settlement. Earlier in a meeting, the National Assembly Standing Committee on Finance and Revenue approved the Finance Amendment Bill 2009. The bill is designed to integrate all tax services under the Inland Revenue Services and provide a legal base for computerised audit of taxpayers. Ahmed said that the Finance Amendment Ordinance 2009 was re-promulgated twice and this ordinance was valid up to June 5.

He proposed that the committee should bring the ordinance on the agenda of the upcoming budget session of the National Assembly for its timely passage. He said that most of the amendments in the Sales Tax Act, Income Tax Ordinance and Federal Excise Act were related to harmonisation of taxes to facilitate honest taxpayers. Resultantly, one official of the Inland Revenue can deal with all the affairs of sales tax, income tax and federal excise under one roof.

Member Legal FBR, Aqil Usman said that if a case was selected for audit the same could again be picked up for the audit next year. Usman said that penalty on the revision of income tax returns has been reduced by 75 per cent. In case a taxpayer wanted to revise his return after issuance of a show-cause notice, the rate of penalty has been reduced by half. The FBR chairman said that inflationary impact of the Value Added Tax (VAT) would not be more than two per cent.

Textile exports up 7% this year