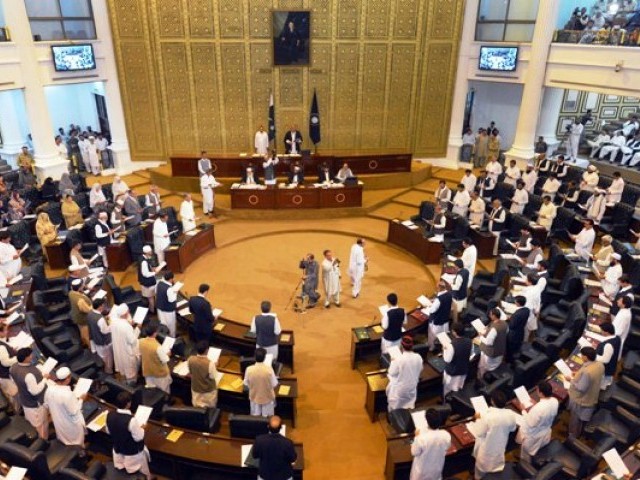 PESHAWAR: As Tuesday’s sitting was adjourned owing to a boycott by lawmakers over Baldev Kumar’s appearance, the provincial government could not table a controversial amendment to right to information law.

The Khyber-Pakhtunkhwa (K-P) government had drafted the Right to Information (Amendment) Bill 2018, and had been listed on Tuesday’s agenda.

The bill empowers government bodies to refuse information requests under the plea of ‘mala fide’.

The bill also seeks to amend the section-7 of the act so that whenever someone is applying for information, shall provide “cogent and sufficient reasons” for his request.

“The requester’s application shall prominently show that the information requested for is one of public importance.”

Moreover, it empowers public bodies to refuse a request for information which pertains to the internal communication of public bodies such as note sheets of a case file containing personal views of an officer, routine orders of the competent authority of a public body relating to assignment of a work or distribution of business.

The bill has been criticized on social and in mainstream media for being ‘against the very spirit of the law’.

Muhammad Anwar, executive director Centre for Governance and Public Accountability (CGPA), in a statement criticised the bill, stating that these proposed amendments are a serious blow for openness and transparency, something which the K-P government has always taken credit.

Earlier, before Tuesday’s sitting got underway, K-P Assembly Speaker Asad Qaiser twisted a question on the amendment in a news conference.

“If one person has rights the other party also has rights. We have to look at the rights of both sides. The bill is yet to be tabled and if anyone has objections amendment can be made in it,” he said.

Meanwhile, a Coalition on Right to Information (CRTI) has strongly opposed the proposed amendments.

“The proposed amendments are regressive and will seriously undermine the efficiency of KP RTI Act 2013,” the coalition said in a statement.

“KP RTI Act 2013, in its current shape, is one of the effective and well implemented RTI laws in Pakistan but the PTI-led provincial government is bringing back old colonial mindset again into play by making the process of getting information from public bodies more difficult.”

“It is the fundamental right of the citizens to access all the information held by public departments,” he said, adding that the amendment will discourage citizens to use RTI for solving their service delivery issues.