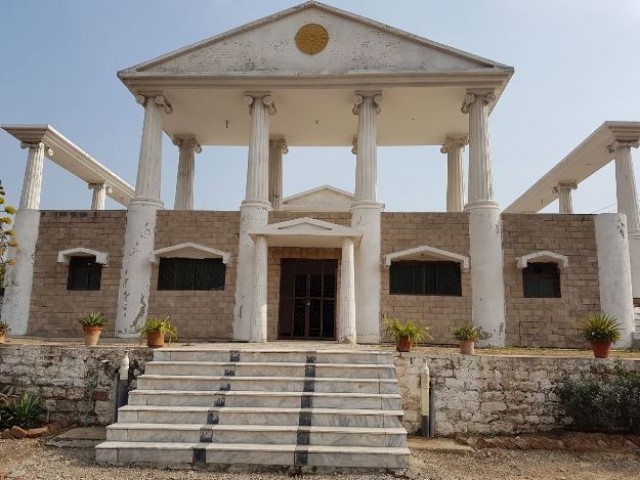 JHELUM: In 326 BCE, Alexander the Great fought King Porus of Pauravas on the banks of today’s River Jhelum in Battle of the Hydaspes, defeating the Indian ruler annexing his empire.

Alexander also buried his horse near the modern-day town of Jalalpur Sharif in district Jhelum and historians say he also built a monument for his horse Bucephalus, but its exact location is unknown. What is known is that the monument built here by the Government of Pakistan and the Embassy of Greece is in dire straits, a manifestation of official neglect.

In 1998, nuclear scientist Dr Abdul Qadeer Khan inaugurated a monument-cum-research centre at a site where Alexander camped for about two months prior to the battle.

The entrance to the gate has an information billboard that states that local and foreign scholars will be invited to the centre to carry out researches on Greek influences on Pakistani culture and vice versa. “They will also be tasked with [locating] the two cities that [Alexander] founded,” one named Nicaea, which is believed to be the present-day village of Mong – a few kilometres from the monument – and the second named Bucephala a site near Jalalpur Sharif or Phalia, which has not yet been located.

The main gate to the monument is often locked. A watchman opens it if someone shows up, especially foreigners. “Yes foreigners come sometime,” comments the watchman, who also looks after a nearby bungalow of an army officer.

The monument – a large white marble structure with 16 arches built in a blend of Greek architecture – is in shabby condition, particularly on the inside. The middle of the first floor has a circled plaque with a map and markings of the path Alexander took from Greece to Persia and eventually to where the monument stands.

There are two large halls on the ground floor, but both are poorly managed. In one hall, the floor is worn out and the paint is peeling. The second hall has dust, worn out furniture, and a display with a few stones and some unmarked fossils. In one corner stand a few wrapped flags.

A few maps and posters have also been placed in both rooms with details of the battle. They include extracts from the book Alexander the Great, written by Allen Lane.

It reads that Porus was unwilling to capitulate and he had fought in the thick of the battle and only when wounded in the right shoulder goaded his elephant into retreat. Alexander had seen his might and gallantry and wished to save him and sent Ambhi the Indian to overtake him with a message. After Porus bent his knees to the ground, thin and tall Alexander asked how he wished to be treated.

When Greeks were less fond of Alexander the Great

“Treat me, O Alexander, as befits a king,” Porus said. With this reply, Alexander installed Porus as a satrap and gave him dominion over lands to the south.