PM Abbasi had asked for a debate in the NA on whethe­r the govt has the right to take legisl­ative decisi­ons
By Hasnaat Malik
Published: February 20, 2018
Tweet Email 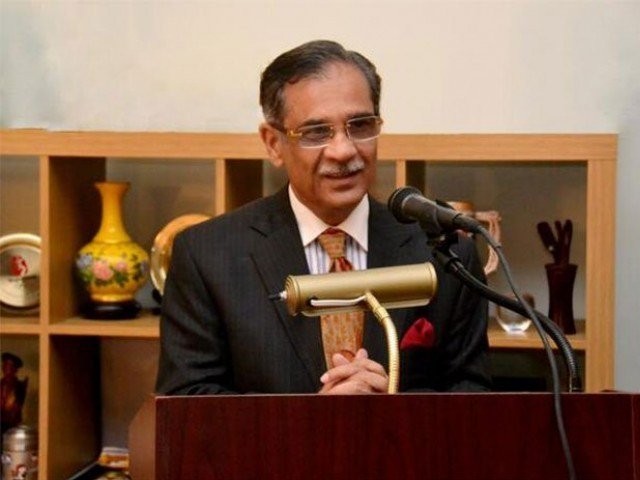 ISLAMABAD: Chief Justice of Pakistan Mian Saqib Nisar has observed that the Supreme Court has the power to review executive and legislative acts for any violation of fundamental rights and the basic principles of the constitution.

“I have repeatedly said that parliament is a supreme institution, but there’s something even more supreme, and that is the Constitution”, the chief justice said during the hearing of a constitutional petition filed by two media persons for ensuring transparency in the media.

The CJP also said jurisdictional limitations on the judiciary are already determined in the constitution and they will not violate these lines.  He urged the media to avoid misreporting about the Supreme Court.

On Monday, Prime Minister Shahid Khaqan Abbasi strongly criticised the superior judiciary for labelling elected representatives as “thieves and looters” and also asked for a debate in the House on whether the government has the right to take legislative decisions.

The uncharacteristically fiery speech came shortly after the PML-N’s parliamentary party, presided over by Abbasi and including national and provincial assembly members and senators of the PML-N met to discuss whether or not to discuss the judges’ conduct on the assembly floor.

Later, the CJP, while addressing journalist Hamid Mir, who is a petitioner in the case, said that judges just discuss hypothetical situations for better understanding, but they maintain the greatest respect for the political leadership.

Mir said that there are people who are intentionally propagating against the judiciary, but judges should just ignore them. Upon this, the CJP made it clear that they are neither showing weakness nor worry. He added that the SC did not need to give an explanation of its position, and would only use its legal powers if justified.

Tensions between the Supreme Court and the ruling party intensified after hearings of the Election Act 2017 case, wherein the judges raised certain questions. Later, the PML-N’s top leadership raised objections over their remarks.

PM slams judiciary for labeling MPs as ‘thieves and looters’

Regarding the matter of Pemra’s independence, the bench has noted that presently, Pemra is not an autonomous body and they have to make it independent in view of the media commission’s report. The court also expressed concern over how Pemra will be made independent when a majority of its board members belong to the federal government.

The chief justice also said that professionals should be appointed to head regulatory bodies.

Another judge, Justice Umar Ata Bandial, lamented that top posts at most regulatory bodies are vacant, adding that the appointment process for Pemra members should be independent.

However, Information Secretary Nawaz Sukhera stated that Pemra is an independent body and the federal government does not interfere in its internal affairs. “We believe Pemra is totally independent. However, only one directive was passed by the federal government, wherein Pemra was directed to close all TV channels during the Faizabad sit-in operation and the other bench of the apex court appreciated government’s direction in this regard,” he stated.  Later, the secretary sought two weeks to consult the prime minister and the minister.

Meanwhile, the bench hearing the plea of the Press Association of the Supreme Court has decided to issue notices to all media houses which are delaying the salaries of their employees.