The magic of the sitar unveiled

The magic of the sitar unveiled 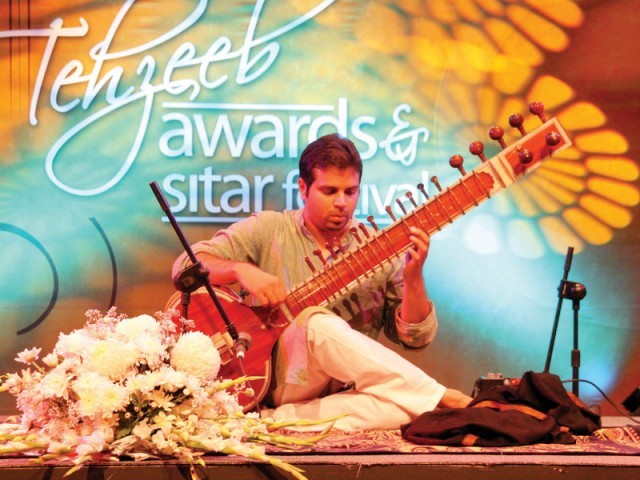 It was a busy Thursday evening as small groups of people flocked to the Karachi Arts Council to attend the Tehzeeb Sitar Festival.

The event started late, as elderly people (the real fans of classical music) slowly made their way into the indoor auditorium, but as soon as the first chord struck, everyone realised that it was worth the wait.

The two day festival, organised by the Tehzeeb foundation, featured Pir Aftab Shah Jilani as the chief guest whereas the event was presided over by the very well known writer, Mushtaq Ahmed Yousufi.

Before the beginning of any performance, all the performers sought permission from the legendary Ustaad Rais Khan who sat in the audience, and this act of humility revisited the ustaad-shaagird relationship, an integral part of classical music training.

The first sitar performance gave everyone goose bumps, as the fourteen-year-old Shehroz Hussain astounded everyone with his immaculate control over the complicated instrument. Though Shehroz was not listed in the performer’s list as he was a guest performer, he proved to be the find of the evening. Kudos to Tehzeeb, for bringing new talent to the forefront.

Next came Rakae Jamil, whose recent claim to fame has been his guest appearance as a sitar player with Noori in Coke Studio. Despite his success in Coke Studio, he disappointed most of the music lovers at the festival. Playing “Bahar Aaee” one of the most popular tunes composed by Faiz Ahmed Faiz which the audience only enjoyed because of the mesmerising tune, he seemed a little under rehearsed and couldn’t match the grandeur of the event.

Although primarily a sitar festival, the inclusion of Javed Niazi and Babar Niazi (renowned folk vocalists of Pakistan) added more flavour to the festival. The Niazi brothers take their musical inspiration and style of music from their father, the very well known Tufail Niazi. The duo is also the recipient of Pride of Performance. They performed  a couple of short and mesmerising pieces, but the best of them all was their rendition of the popular piece of poetry “Kherya De Naal” which gives a totally different take on  the well known Heer Ranjha love story.

After the Niazi brothers’ performance, the Tehzeeb award ceremony took place in which the foundation acknowledged great contributors in the field of music, Urdu literature and fine arts.

After the awards ceremony came the performance that everyone was waiting for: Ustaad Rais Khan and his son Farhan Khan live on stage. Belonging to Mewat Gharana, Ustaad Rais is one of the most gifted musicians of the subcontinent and has toured the world and performed great jugalbandis with great musicians.

Rais Khan and his sitar set the stage on fire, and what was surprising to note was the way a group of youngsters was enjoying his music. No matter how old he might be, and how classic the sitar is, his rendition took everyone into a peaceful trance. On the other hand, his son Farhan Khan is no less of a magician as he supported his father with another sitar and stole the limelight with his magical pieces.

Although one wondered why a great sitar player such as Ustad Nafees Ahmed was missing in a sitar festival, the Tehzeeb festival kicked off with a blast. Despite it being a weekday, a good number of people attended the event.

The sitar is an instrument which is known to be played as if one is arguing or conversing back and forth, and the variations just add to strength of the player’s argument with the audience. The sitar is a part of our classical heritage, and Tehzeeb is doing a great job by revisiting and recording its players.