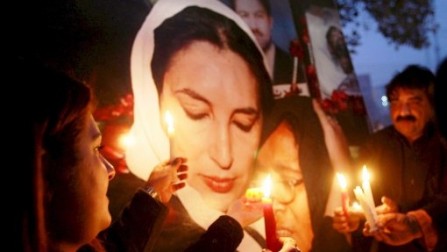 Supporters of slain opposition leader Benazir Bhutto light candles in front of her portrait during a ceremony in Lahore. PHOTO: EPA

LAHORE: Spokesperson Madrassa Haqqa-niya in Akora Khattak Maulana Yousuf said that suicide bombers could be former students of the Madrassa, but he denied taking responsibility for their actions.

The institute was accused by the committee probing Benazir Bhutto’s assassination, but Yousuf brushed aside allegations of its students’ involvement. He added that the madrassa authorities had been grilled by several such committees.

The spokesperson said that there were around 400 students enrolled in the madrassa.

The case was heard at the Adiala Jail in Rawalpindi. The challan was submitted by special prosecutor Chaudhry Zulfiqar Ali

The accused include Rifaqat Hussain, Hasnain Gul, Aitezaz Shah, Abdul Rasheed and Sher Zaman who are behind bars for the case. The accused were given a copy of the challan. The charges will be formally announced on June 12th.