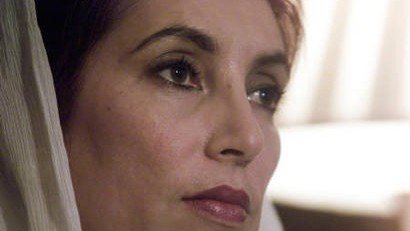 Benazir Bhutto was killed on December 27, 2007 in a gun and suicide attack after adressing an election rally. (TMN)

RAWALPINDI: A Federal Investigation Agency (FIA) team has concluded that the conspiracy to assassinate former premier Benazir Bhutto was hatched at Madressa Haqqania Akora Khattak where suicide bombers had been assigned the job.

The high-powered FIA team headed by Khalid Qureshi has completed its investigation into the Benazir Bhutto murder case afresh. The inquiry report holds Baitullah Mehsood as the principal accused who not only prepared the conspiracy but also arranged for its execution. Five men namely Aitizaz Shah, Sher Zaman, Abdul Rasheed, Rafaqat Hussain and Husnain Gul, who are under custody, have been designated as real accused. The report links the suicide bomber with these arrested men, saying he stayed at the house of these accused for two days.

The inquiry has nominated as accused three officers of the Rawalpindi police – SSP Khurram Ishtiaq, SP Ashfaq Ahmed and Inspector Kashif Riaz, then SHO of police station City. Inspector Kashif Riaz has been charged with the crime that, despite being legally responsible, he did not arrange for the post-mortem of any of the bodies of 24 killed in the suicide attack. SP Ashfaq Ahmed was assigned security duty at Liaquat Bagh, but he went to the highway with his force without any intimation.

To hide this crime he tampered with the police record. Similarly SP Khurram ordered hosing down of the murder site on his own even though he was not authorised to do so. A new interim challan of the case based on these findings will be presented in the special anti-terrorism court No.1 on Wednesday. Meanwhile, the Rawalpindi bench of the Lahore High Court reserved its judgment on Tuesday in a petition seeking to bar the Federal Investigation Agency (FIA) from probing the assassination of Benazir Bhutto. The petition was filed by Bhutto’s former Protocol Officer Chaudhry Aslam.

The applicant’s counsel Asad Rajput argued that Interior Minister Rehman Malik has been nominated as an accused in this case while an application has already been filed in the court for the registration of an FIR against Malik. The petitioner contended that the FIA should be stopped from probing Benazir’s assassination case because it was an agency working under the interior ministry. The petitioner was of the view that if the FIA intended to investigate the case, it would not be possible for it to make a case against the minister concerned. If the agency was to probe the case, the minister should resign first from his post, he said.

The petitioner requested the court that while issuing a stay order, the FIA should be stopped from submitting the interim challan in the court, and its inquiry should be declared null and void. Meanwhile, the federal government’s lawyer, Baber Ali, said that the FIA did not initiate the inquiry on its own, but the federal government had issued a formal notification in this regard. He produced the notification in the court and said that the seven-member inquiry committee comprised intelligence officers from Sindh, Punjab and Islamabad under an officer of the FIA. He argued that the petitioner had earlier objected to the inquiry of the Punjab police and now was criticising FIA’s investigations.

He said that the petitioner had nothing to do with the case and was wasting the court’s time. He requested the court to dismiss the petition and allow the FIA’s joint team to submit its challan.