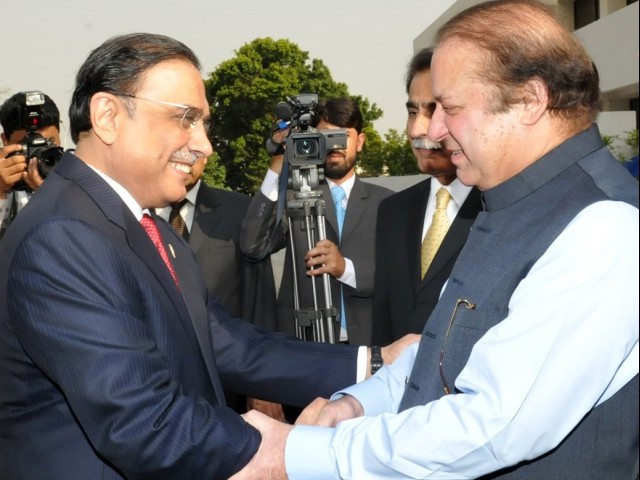 ISLAMABAD: Long before the Sharif family, former President Asif Ali Zardari was accused of having offshore companies in the British Virgin Islands, Panama, Gibraltar, Jersey, and the Isle of Man. The accountability court currently conducting the Sharifs’ trial had acquitted Zardari due to the unavailability of the original record.

Earlier, the National Accountability Bureau (NAB) had to inform the Islamabad High Court that Accountability Court Judge Muhammad Bashir had acquitted the former president without collecting the original records of his cases from the Supreme Court.

Surprise return: Sharif is back — to face accountability

Now, almost five months into the Sharif family’s trial, it has emerged that the NAB has yet to produce the original records of the Panama Papers Joint Investigation Team (JIT)’s report and the trial is being conducted using copies of the document.

Similarities in both the matters involved the judge, the courtroom, the alleged use of offshore companies, and the fact that the original records of Zardari’s cases and the JIT report are with the Supreme Court.

Also, both Nawaz Sharif and Zardari have raised objections on fast-track proceedings, though Zardari’s trial took almost 18 years to conclude.

In his acquittal plea, Zardari’s counsel had even called the NAB Ordinance a “black law”, adding that Zardari was targeted for being the spouse of ex-prime minister Benazir Bhutto as he was not a public office holder when he was accused of corruption and corrupt practices.

“The process of accountability will not stop with me,” three-time PM Nawaz Sharif said, adding that there was a sense of urgency to wrap up cases against him before the Senate and general elections next year.

A star witness against Zardari – Hassan Wasim Afzal – had informed the court that the original documents pertaining to the offshore companies remained in his possession, including bank records identifying the beneficial holder of accounts in Switzerland and the original orders of seizure by the Swiss Police Chief Beat Frey as well as the original orders issued by Swiss Judge Danial Davo freezing the account.

Following the PPP co-chairperson’s acquittal in the SGS and Cotecna corruption cases, NAB challenged the decision before the IHC, requesting that it set aside the judgment as the Lahore High Court judicial registrar, in a letter dated February 19, 2000, clearly stated that the original records of the SGS and Cotecna cases, along with other documents were sent to the apex court in an appeal filed by the accused.

The accountability court judge did not summon the original records from the office of the Supreme Court though it was required for being placed on the file of the court, NAB said. “This fact is also available in the report of the registrar of the Accountability Court, Islamabad, which was submitted before the court during the proceedings of the case,” NAB added.

In the appeal, NAB had claimed that the court concluded the trial without following due procedure and decided the entire case on an acquittal application filed under section 265-K of the Criminal Procedure Code.

On the other hand, the JIT report probing the Panama Papers is critical for the three references against the Sharif family – Avenfield Apartments, Al Azizia Steel Company and Hill Metal Company and Flagship Investment and other companies – but the original report has yet to be produced in the trial court.

In its July 28 judgment, the apex court had directed the top graft-buster to file references against Sharif, his sons, daughter, and son-in-law, with directions to conclude them within six months.

NAB had filed references against Nawaz Sharif, Maryam Nawaz, Hussain Nawaz, Hassan Nawaz, and Captain (retd) Muhammad Safdar relating to the Avenfield flats, comprising flat No 16 and 16-A, 17 and 17-A at Avenfield House in the posh Park Lane area of London.

The ex-premier and his sons have been named in all three references while Maryam and Safdar have only been named in the Avenfield reference. Recently, NAB filed a supplementary reference against Sharif family and the star witness, JIT head Wajid Zia, is expected to record his statement on February 8.

The statement of a prosecution witness, Afaq Ahmed, who produced documents pertaining to the infamous ‘Qatari letter’ to Zia, was delayed thrice just because his original record was with the SC. On Feb 2, NAB requested Judge Bashir to requisition the JIT record from the SC.

Incidentally, on November 24, 2015, the court had acquitted Zardari in the SGS and Cotecna cases after the original documents could not be produced before the court, stating “there is no probability of conviction of the accused in this case.”

In the appeal, NAB said that the court passed the impugned order without considering the gravity of the offence committed by the respondent and without a deeper appreciation of record and evidence produced by the prosecution. “There is overwhelming evidence against the respondent,” it read.

The court will hear three references against Sharif family on Feb 6 (today).

On Kashmir, we stand united: lawmakers