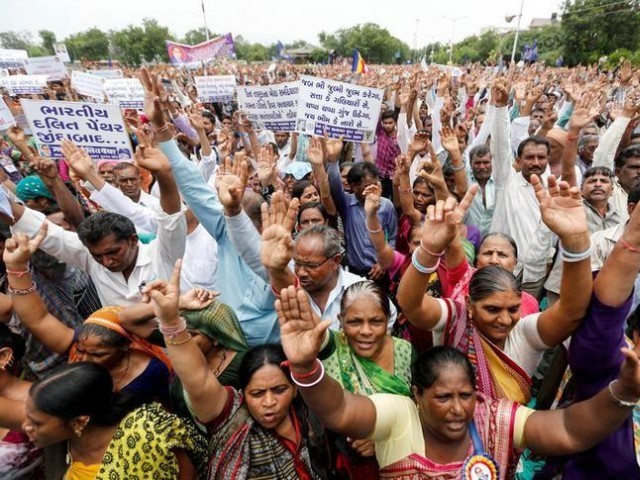 People shout slogans as they attend a protest rally against what they say are attacks on India's low-caste Dalit community in Ahmedabad,PHOTO: REUTERS

Religious discrimination and dominance of Hindu extremists have ignited around 36 separatist movements across India.

This was stated by speakers as a book by Tariq Ismail Sagar, “Separatist Movements In India”, was launched by the Muslim Institute in the federal capital on Thursday.Speakers said that it presented an academic effort to discuss the ground realities about ongoing separatist movements in India.

Based on research, Sagar’s book analyses the political and economic conditions of India and found that there are more than 36 separatist movements currently in India, including 22 which could be described as large-scale movements. Many of these movements have been continuing for decades and their proponents are from different religions and regions.

It found that religious discrimination and dominance of Hindu extremists was the basic reason for the germination of such separatist movements. Divisions along caste lines, though, remain the single largest cause of discrimination in India.