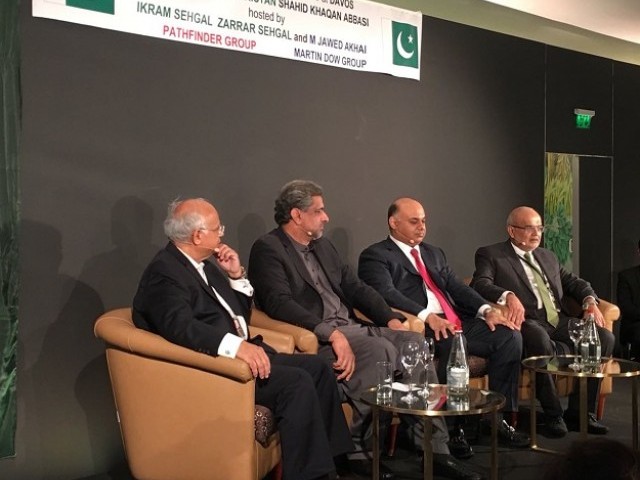 DAVOS, SWITZERLAND: Pakistan would exercise all options to retain its sovereignty, as it faces serious challenges from its two neighbours, particularly India that has aggressive designs, Prime Minister Shahid Khaqan Abbasi told the world audience on Thursday.

A nuclear India has aggressive designs against Pakistan and the country has the right and responsibility to counter that design, said the premier. He was speaking at traditional Pakistan Breakfast, being organised by Pathfinder Group on the sideline of the 48th Annual World Economic Forum meeting taking place at Davos.

“If you are threatened then there is no better purpose than retaining your sovereignty,” said the PM while responding to a question from the audience. PPP Chairman Bilal Bhutto Zardari also attended the traditional Pakistan Breakfast.

In Davos, firms meditate on quest for mental wellbeing

The breakfast provides every year opportunity to Pakistani policymakers to give their perspective to the world.

To a question about handling India that is very aggressive despite Pakistan’s desire to have peace, the premier said that India has made certain moves in the recent past including the Cold Start Doctrine but the country has developed a counter to that. It is dynamic situation with India and the solution really lies on resolving the core issue of Kashmir as per the UN resolutions, said the PM.

“If your sovereignty is threatened then you have to counter to that,” he asserted.

To another question on continuous provocation by India and Afghanistan at international borders, the PM said that Pakistan has demonstrated the capability to defend itself but the “policy of restrains mostly works”.

“In today’s world healing fractures is the primary concern and wars only create fractions,” said the PM but added that Pakistan will protect its sovereignty and territorial integrity.

He said that Pakistan was fighting the largest war against the terror.

“Despite what the tweets and the policy statements of the US say, Pakistan is fighting the war against terror with its own resources,” said PM while countering the US President claim that Pakistan lied and cheated in return of $33 billion aid.

“I am not sure where the information for these tweets comes from but the reality on ground is very different,” he added.

“During two-minute long meeting with Donald Trump on the sideline of the UN General Assembly, I found President Trump very different person from his public persona. Whether tweets are reflective of the government policy are not, I think this needs to be looked into it,” he added.

The PM said that Pakistan will engage the US at every level and hope that the US will appreciate our view.

Today, Pakistan has been attacked by the elements based in Afghanistan. Last 29 suicide bombings in one year originated from Afghanistan including attack on Deputy Chairman Senate, Maulana Ghafoor Haideri, said the premier.

Maulana Haideri survived the attack but 22 other people were killed.

“The ills of Afghanistan do not emanate from Pakistan”, said PM Abbasi.

He said that Pakistan still hosts three million Afghan refugees and the world contributes less than $8 per person per year.

Pakistan has defeated the terror at the same terrain where the rest of the world has failed. Terrorism is a global phenomenon.

There are two Pakistan. One on the CNN and the other is the reality and I invite the global investors to come and see the real Pakistan, said the PM.

The PM said that the gap between reality and the perception was huge and forums like Pakistan Breakfast can help to bridge this gap. He thanked the organisers for putting the Pakistan’s perspective before the global elites.

The PM said that almost five years after the PML-N government, the democracy and constitutionalism have been consolidated. The media is very vibrant, may be too vibrant, said the PM. The institutions continue to evolve and judiciary is finding its own space, said the PM while saying the executive has a limited space. The civil military relationship continues to evolve within the ambit of the Constitution, he added.

The prime minister said that the economy has been constantly growing and posted the highest growth rate in ten years last year. The PM said that the inflation rate was low and the investors’ confidence was high. The global investors and the bankers are bullish about Pakistan.

To a question by the New York Times correspondent, The Prime Minister said that there were no sovereignty issues with respect to the CPEC, although there were small issues that both the countries were amicably resolving.