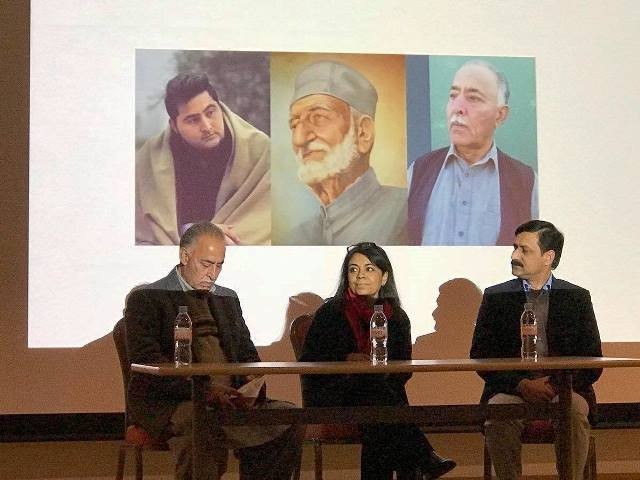 LONDON: In Ali Zeeshan Kay Naam Aik Nazm, poet Amjad Islam Amjad explains why he doesn’t want the life he dreamt of for his son. He says his son has grown up in a different time, with a different set of norms, and even if he ends up thinking like his father, the boy needs to arrive at the conclusion – his own dream – himself. But what if circumstances take a different turn, leaving mothers and fathers to live their children’s dreams. Friday night in London saw two fathers who both carry their children’s legacies forward.

People showed up in large numbers to give a hero’s welcome to Iqbal Lala at the School of Oriental and African Studies (SOAS) in London. Before Mashal Khan’s father had the chance to utter a word, he had already received two standing ovations. And this was before Malala Yousafzai’s father Ziauddin Yousafzai took the podium to formally introduce Lala.

“We both are known because of our children, but Iqbal Lala is the bravest Pakhtun alive,” said Yousafzai as the hall echoed with applause. Some people stood up, again, in acknowledgement of not just the statement, but the moment when two of Pakistan’s most resilient fathers were together on stage. “This is amazing,” a girl in her late teens whispered into her friend’s ear at the back of the hall.

“We might know him because of his son, but long before that, Lala made sure that he celebrated his daughter’s first birthday with the spirit of a son. He broke the chains of patriarchy back then, and today, he stands for truth and justice.”

Despite being the father of a girl who taught us how to dream, Yousafzai made sure that the night belonged to Lala, his legacy, and his son. He invited him on stage like a fanboy would introduce a rock star and countered any attempt to needlessly politicise the talk.

Lala wasn’t dressed in a suit like Yousafzai. He wore a thick cotton sweater and a suede jacket over a faded shalwar kameez, not unlike the generic image of the old, wise man from Swabi. He was sad but proud, overwhelmed yet poised, as he threw one gem after another and answered the most leading of questions with eloquence.

“Mashal has gotten the best of Pakistan. I was surprised and overwhelmed to see how many people reached out to us to show their solidarity,” he said with a smile. Lala recalled that Mashal was a Sufi by heart and a humanist in practice, always promoting freedom of thought for everyone. “He would always say that ‘this is God’s earth, not ours, that’s why animals and birds have an equal right to it’…he just loved keeping pets and caring for animals.”

As the night grew darker, so did the nature of questions from the audience. Some in the audience were eager to appropriate Mashal’s gruesome murder as an attempt at suppressing the ideology they subscribed to. An audience member asked Lala why all the people who have been arrested in his case are from ‘liberal’ factions of society and not the right wing. “That is not true,” said Lala. “All sorts of arrests have been made. And I have been a political worker long enough to know that these days politics of interests have overtaken politics of ideology. Some people from the ‘left’, or whatever you call it, have equally venomous thoughts and ideas.”

A common question from the crowd was the degree of progress in Mashal Khan’s case and whether Lala thought justice would be served. “Historically speaking, justice has never been served in Pakistan. But now Mashal’s case is being tried not just in courts but also in the streets of this country and that makes me very optimistic. Kudos to all the people who have testified under immense pressure.”

Mashal Khan’s friend was pressurised to say he committed blasphemy. He refused

Lala, a Pushto poet who actively participated in Bacha Khan’s Khudai Khidmatgar movement, believed society has degenerated to a point where if you don’t like your neighbour’s dog, you claim it is mad and kill it. “This is what really needs to change. For this, we have to unite as a society … I hope Mashal has given us enough reason to do that.”

By the end of the gathering, the political partisanship of some members was clearly audible and on display. Slogans like ‘Mashal’s blood will cause a revolution’ and ‘Shame Imran Khan shame’ echoed. Yousafzai was forced to intervene and close the evening by saying, “People like Iqbal [Lala] never contradict their statements like the extremists do. He will always stand by the truth, and trust me, whoever stands with him today, will stand by the truth in times to come.”

The idea of forming a Mashal Khan Foundation against religious extremists was also pitched at the end of the session.

The event was a part of the annual Bacha Khan lecture organised by Bloomsbury Pakistan and moderated by Dr Mukulika Banerjee from the London School of Economics.