Mashal Khan's friend was pressurised to say he committed blasphemy. He refused

Mashal Khan's friend was pressurised to say he committed blasphemy. He refused

A friend of Mashal Khan who was also accused of committing blasphemy claimed on Monday he was pressurised by university students to say Khan had committed blasphemy, but he refused to do so.

In a statement recorded before a judicial magistrate, Abdullah, a fellow journalism student at Abdul Wali Khan University Mardan, said Mashal and he were accused of committing blasphemy by other students from the journalism department.

“Mashal Khan was a talented and brilliant student having a kind heart. On 13.4.2017, at around 11:00am, one of my friends, namely Muhammad Abbas, called me on my cellular phone and told me to come to the journalism department. Said Abbas was a conspirator,” the statement read.

“Upon his call, I proceeded to the journalism department and saw Mudassir Bashir (the class representative), the actual perpetrator, along with other students who there and then, charged me and Mashal Khan with blasphemy and all of them alleged that we have deviated from the right path along with Zubair. 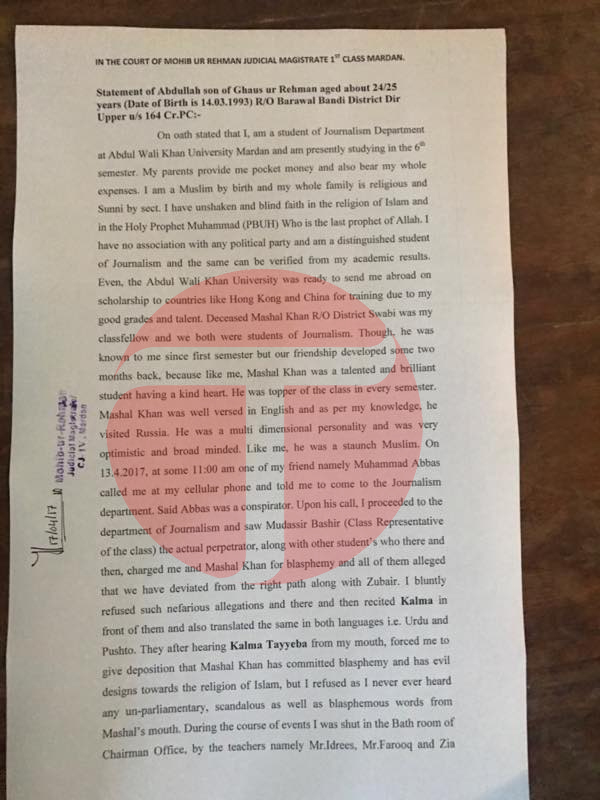 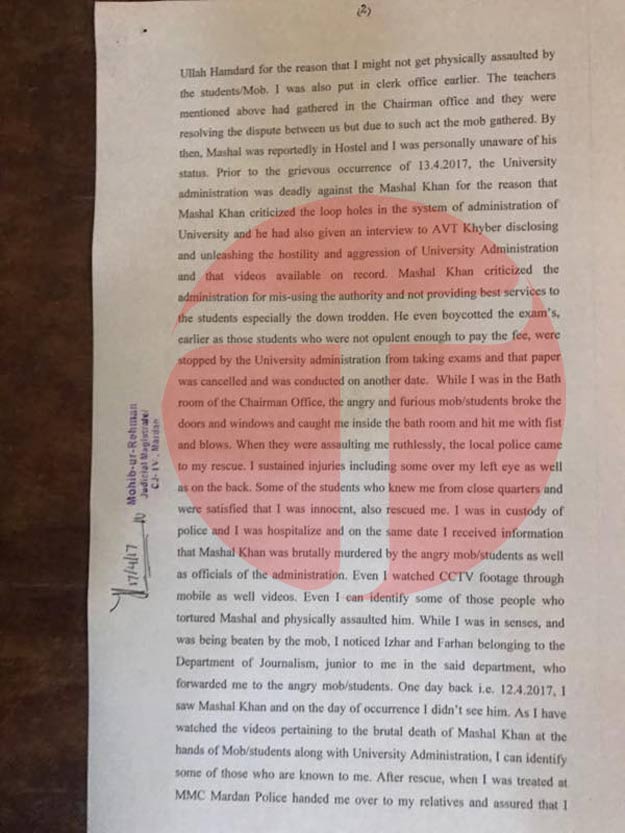 Abdullah refused the allegations and immediately recited the shahadah to prove his innocence. This is when, according to Abdullah, the students tried to force him to give a statement saying Khan had committed blasphemy.

“After hearing the shahadah from my mouth, forced me to give a deposition that Mashal Khan has committed blasphemy and has evil designs towards the religion of Islam, but I refused as I never ever heard any unparliamentary, scandalous, or blasphemous words from Mashal’s mouth,” he added.

Abdullah also claimed that the university administration had already been ‘dead-set against’ Mashal Khan for speaking out against the administration’s various shortcomings.

“Mashal Khan criticised the administration for misusing authority and not providing the best services to the students, especially the down-trodden. He even previously boycotted the exams as those students who could not afford to pay their fees were stopped by the university administration from taking exams, and that paper was cancelled and was conducted on another date,” the statement read.

“While I was in the bathroom of the chairman’s office, the angry and furious mob broke the doors and windows and caught me inside the bathroom, where they punched and kicked me. When they were assaulting me ruthlessly, the local police came to my rescue. I sustained injuries including some over my left eye and well as on the back. Some of the students who knew me well and were satisfied that I was innocent also intervened to rescue me,” the statement added.

Abullah said he can identify some of those people who tortured Mashal and physically assaulted him. “I voluntarily contacted the local police to record my statement today. I want justice not only for me, but for Mashal Khan as well, as we are both innocent,” the statement added. 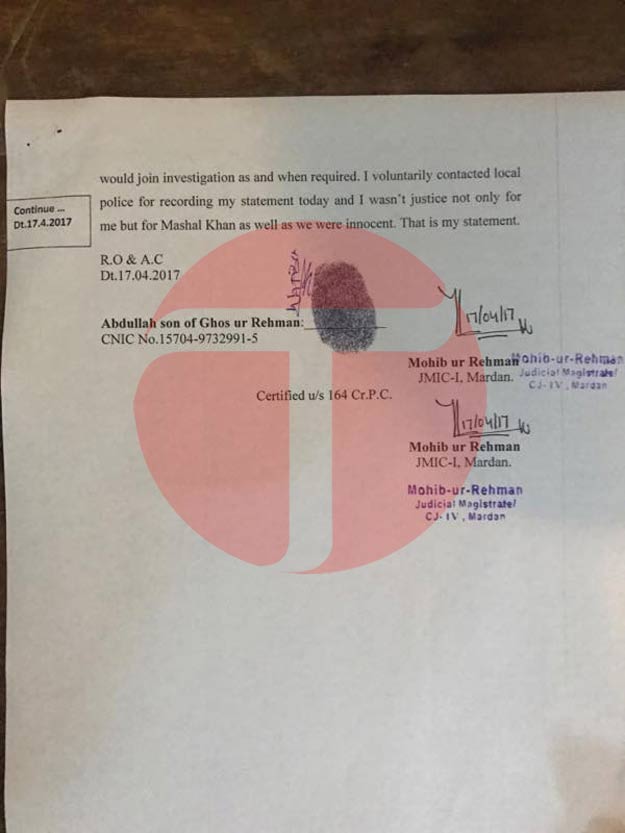 Mashal was shot in the head and chest and then his body desecrated by a mob who accused him of committing blasphemy. The video of the gruesome violence made via mobile phone cameras shows Mashal’s disrobed body – covered in blood – being dragged, first in a hallway and then on a road of the campus. It also shows students attacking the policemen who tried to intervene.

The FIR of the grisly killing was registered at the police station of upscale Sheikh Maltoon neighbourhood against 20 suspects, including university employees, students and a tehsil councilor. The FIR – registered under section-302, 148, 149, 297, 427 of the Pakistan Penal Code along with section-7 of the Anti-Terrorism Act – says that the tragic event was preceded by a students’ protest in which the mob accused Mashal and his two friends – Abdullah and Zubair – of committing blasphemy. “During negotiations between the administration and protecting students, the police came to know that a mob had brutally killed Mashal Khan in Hostel-1 of the university,” it said.