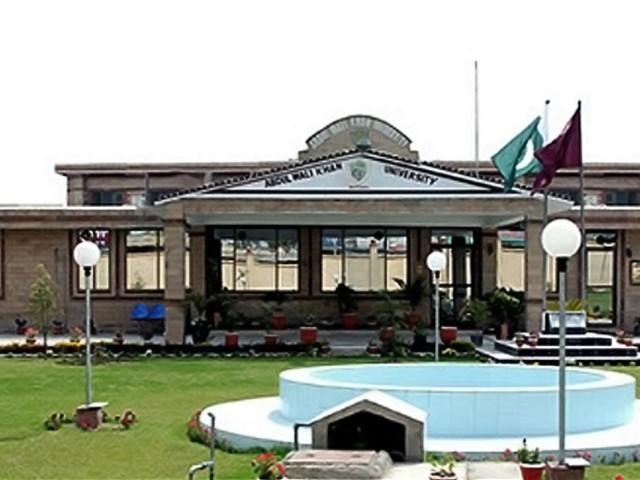 MARDAN: A journalism student was lynched at Abdul Wali Khan University (AWKU), Mardan in broad daylight on Thursday after being accused of blasphemy.

The deceased was identified as Mashal Khan, a resident of Swabi and a student at AWKU’s Journalism and Mass Communication department.

A friend of the deceased student told The Express Tribune that a mob attacked him before shooting him in the head and chest. He added that the mob then continued to beat his body with sticks.

The students then began protesting at the campus and shut it down.

A police contingent that arrived at the scene immediately took custody of the body, but students kept demanding it back.

Mardan DSP Sheikh Maltun Mardan Haider Khan confirmed to The Express Tribune that the victim had been murdered by his fellow students.

He added that five students were injured in clashes but police managed to bring the situation under control.

Later, K-P IG Salahuddin Mehsud told The Express Tribune that arrests have been made and an investigation is already under way. He added that further arrests will be made after the police identify other members of the mob.

“Blasphemy is yet to be confirmed,” IG Mehsud added.

A notification issued by the police stated that 59 people were arrested from the university for their suspected involvement in the lynching.

The body has been shifted to District Headquarters Hospital for an autopsy. 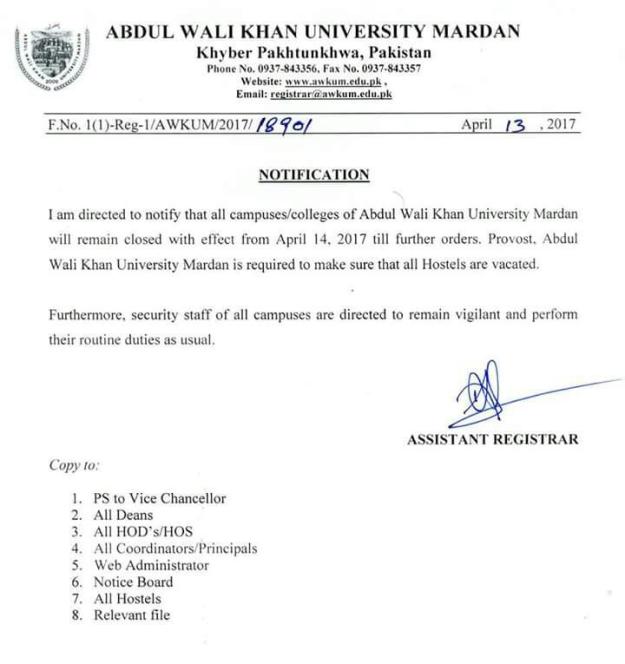 A varsity notice stating that the university is indefinitely closed. PHOTO: Express

Following the incident, AWKU Assistant Registrar Ashoor Khan issued a notification stating the university will be closed until further notice.

Ten students have been arrested after Thursday’s attack the grounds of a university in the northern city of Mardan, local police chief Mohammad Alam Shinwari said. “After severe torture that led his death, the charged students then wanted to burn his body,” said Shinwari.

One of Khan’s teachers recalled that he was a passionate and critical student. “He was brilliant ‎and inquisitive, always complaining about the political system of the country, but I never heard him saying anything controversial against the religion,” said the teacher.

Blasphemy carries the death penalty in Pakistan. In many cases, an accusation alone is enough to inspire vigilante action against suspects.