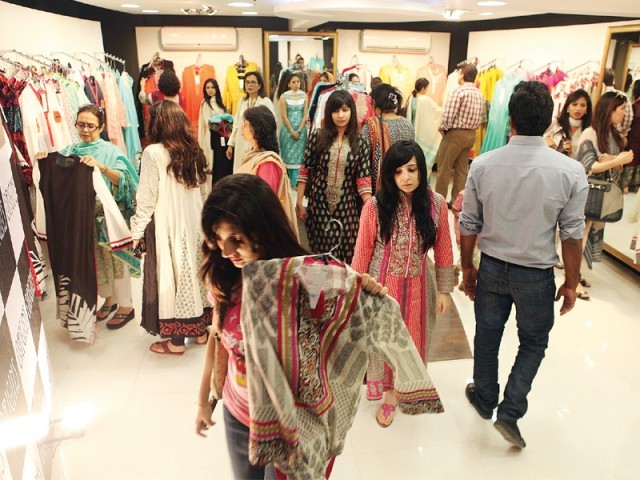 Origins offers a one-stop solution for all your clothing needs. PHOTOS: PUBLICITY

If you want something chic, something ethnic, something cotton and something which is not a very expensive designer collection, nor does it falls in the bracket of lawn collection. Then Origins is the one stop shop for you!

Origins, which has a flagship store in Lahore, opened its doors at Zamzama on April 30, here in Karachi.

The store was surrounded with celebrities and a few socialites apart from the fashion journalists hoping to see what it has to offer. The store’s launch was crowded as people were scrambling to see the outfits and there was very little space to walk around in a liberated manner. At the launch itself, there were as many as 52 designs available and the price range was between Rs2,800-Rs6,000. Ali Pervez, co-owner of  said: “The whole idea is to create a brand. What was missing in Pakistan is a complete pret line, this is the one thing that we’re offering at our store.”

Pervez further said: “In a country like Pakistan where there’s a concept of expensive designer wear and where an expensive lawn market exists, pret line is not being catered to women [from various walks of life]. Hence we see in the West, there is a whole new concept of ready-to-wear collection which is acceptable and highly appreciated, (in the same way) we would like our brand to be like none other than Banana Republic, where women can easily come and buy a pret outfit in a very competitive market.”

Spotted at the launch event were television actors Sakina Samo, Ayesha Khan, Humayun Saeed and Mahirah Khan-Askari.  Mahirah said: “I love this collection.” Sakina Samo was quite positive about the outfit collection: “It is ethnic and comfortable collection.”

Designer Feeha Jamshed of TeeJays remarked that: “ is original.” This statement was completely accepted by Pervez, who claimed: “She is right. Nobody else is promoting the culture of Pakistan like we are, from bringing Sindhi ralli work, Kashmiri tanka work and Bahawalpuri block prints. We believe many people are going western with their outfits but we are completely sticking to our exclusive (design philosophy).”

The lady behind the design scheme is Ayesha Pervez, who in the words of Nadia Jamil, TV show host, is: “A business genius and a super-human of the 21st century.”

While giving out details about why she chose to be a part of , Jamil said: “I prefer it over other pret-lines because they have used high quality cotton, the tailoring has been done really well and the outfit drapes you fairly well.” Jamil further said: “Origin is ethnic, funky and chic. It’s more for cosmopolitan women. Its natural colour and minimalistic designs will be available in a complete new variety, every other week.”

When Ali Pervez was asked about the response, he said: “The response was great, if you’d say a 100 per cent attendance was in tow then at least out of those people, 95 per cent of people bought something or the other from the store at its opening.”

So what’s up next for Ali Pervez: “We plan to bring our Phulkaari collection to Karachi soon. Apart from that we plan to cater to a bigger clientele in Pakistan by opening multiple stores across various cities, especially in Islamabad and Peshawar.”

Between violence and the self