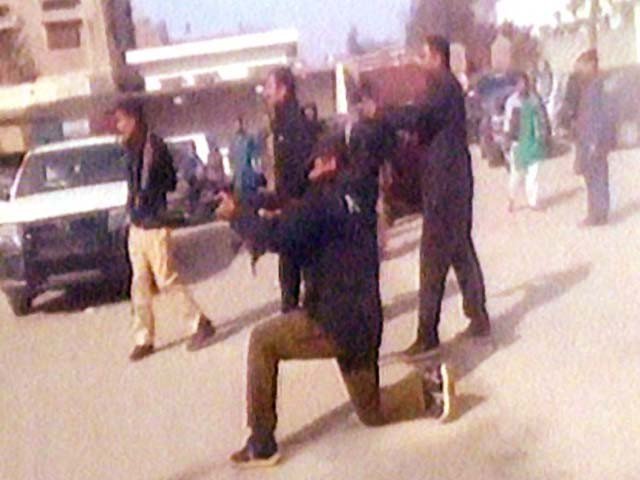 KASUR: A day of rage over the alleged rape and murder of an eight-year-old girl came to an end with two adults being added to the death toll. The streets of Kasur were filled with the stench of burning tyres on Wednesday as residents voiced their anger and outrage at the news that little Zainab, who went missing on Saturday, had been found – raped, dead, and buried in garbage.

In the morning, in front of DHQ Hospital, a crowd of protesters demanded the public flogging and hanging of “the monster responsible”. Inside, her body was on an autopsy table.

A visibly upset rickshaw driver broke his stunned silence to tell The Express Tribune that it was the eighth incident during the last five years, but instead of arresting the killer, the police had only picked up innocent people randomly “as is their routine practice”, since the very first incident was reported.

“This is madness. For God’s sake, just find the killer, whatever it takes,” he pleads as a defeated expression takes over his face.

Funeral prayers for the little girl were offered in absentia. Her body was still in a white coffin in cold storage as people refused to let her be buried because “her innocent face is begging for justice” to be done first. Hours later, her parents returned from Saudi Arabia – where they were performing Umrah – and allowed the burial.

Her mother has just one demand – justice for her baby. “We just want the culprits arrested. Nothing else.”

Around the same time, protesters gathered outside the deputy commissioner (DC) office. The crowd soon turned violent and attempted to attack the office. Policemen opened indiscriminate fire and killed two protesters. At least two others were injured.

The use of guns by the police brought even more protesters on to the streets. Now armed with batons, clubs, and sticks, they blocked almost every artery in the city.

“We just want justice for Zainab,” said a protester. “We are not here to hurt anyone. I don’t know why the police opened fire.”

Zainab’s home is located in a working-class neighbourhood. Walls in the area were covered with decorative lights. They had been put up for Rabiul Awwal 12, and nobody bothered to take them down.

Amid the lights, people had begun putting up posters demanding justice for the child.

A few kilometres away stands the shrine of Bulleh Shah. His message of humanity is lost amid the violence.

Sub Inspector Iftikhar Ahmed told the media that child abuse incidents had surged since 2012, and the police had no clues as to who is responsible.

He claimed that the police had investigated at least 500 people, but could not find a suspect. CCTV footage and the victim’s clothing had been sent for forensics, he added.

Meanwhile, Punjab Chief Minister Shehbaz Sharif suspended the District Police Officer (DPO) of Kasur over the killing of two protesters, and constituted a committee to probe the incident. 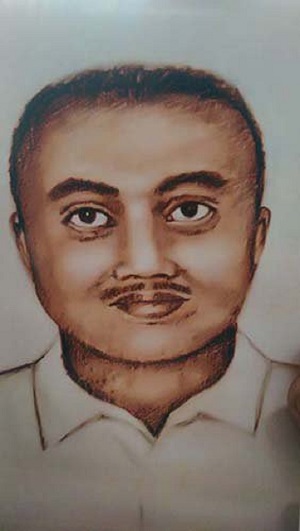 According to a news release, the CM said those involved in this crime would not escape justice. Taking it upon himself to provide justice to her family, he said he would not rest till that was done.

He also expressed deep grief over the death of two protesters in the firing and extended sympathies to their families. He said he had ordered investigation into the firing, and legal action would be initiated against the responsible persons.

The day turned into night, but none of Zainab’s most vociferous defenders from the world of politics came over to offer condolences. Only a few civil society activists and fringe political workers were there. On one’s lips was a question – will she turn into another statistic?

COAS condemns cold blooded murder of innocent Zainab. Responding to appeal by the aggrieved parents to COAS, directs immediate all out support to civil administration to arrest the criminals and bringing them to exemplary justice.

PTI Chief Imran Khan took to Twitter to condemn the incident saying “The condemnable and horrific rape and murder of little Zainab exposes once again how vulnerable our children are in our society. This is not the first time such horrific acts have happened. We have to act swiftly to punish the guilty and ensure that our children are better protected.” 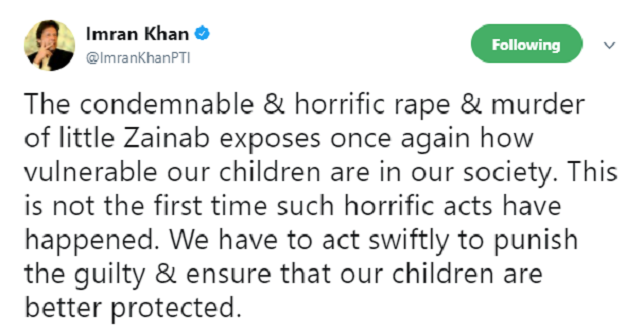 PTI Chief Imran Khan blamed the “total degeneration of Punjab police” for the situation in Kasur and their handling of the protests that took place today.

Speaking to a private news channel, Punjab Law Minister Rana Sanullah stated that agitators in guise of protesters are trying to disrupt the law and order situation of the province.

“All the suspects, from previous cases being spoken about, have been arrested,” said Sanaullah.

He further added that the government was trying resolve the situation and vowed that the culprits will be brought to justice at the earliest.

Chief Minister Punjab Shehbaz Sharif taking notice of the case ordered for the prompt arrest of the suspect. He added that he would be supervising the progress of the case personally.

Deeply pained about murder of a 8-year old girl in a child molestation case. Those societies that cannot protect its children are eternally condemned. Not going to rest till the perpetrators of this dastardly act are apprehended & given severest possible punishment under the law

“Justice should be served to the affected family at all cost. The killers of the innocent girl won’t be able to escape,” he said.

Chairman Pakistan Peoples Party (PPP) Bilawal Bhutto-Zardari has termed the brutal rape and murder the minor in Kasur as shocking and a slap on the face of Sharifdom, which continues to ignore such ghastly incidents.

“Ten incidents of minors’ rape and murders had been reported in Kasur and eleven in Sheikhupura alone last year. It seems some parts of Punjab have been turned into hell for the children, especially the girls but Sharif brothers appear to have abandoned their duty as rulers,” the PPP Chairman said in a statement issued today.

Bilawal said that gory incident of children rapes and murders have shaken the society and any tolerance by Sharif brothers to perpetrators of these crimes won’t be accepted.

PPP Chairman demanded that rapists and killers of every innocent child should be brought to book and none of them should go scot-free.

Bilawal reiterated that protection of children was top priority of PPP and crimes against the children would be sternly dealt with. He expressed sympathies with all those parents who suffered the agonies and assured that PPP stands in solidarity with them. PPP will raise voice against these atrocities on our innocent children at every forum, he added.

Other politicians also took to Twitter to lodge their protests.

Minister of State for Information, Broadcasting, National Heritage and Literary History Marriyum Aurangzeb in a tweet today said, “The rapist and murderer of the innocent girl in Kasur will be awarded exemplary punishment for his wickedness and we are standing with the affected family.”

Her murder is an extremely shameful and condemnable act. The beast who committed this heinous crime deserves the harshest possible punishment.

Maryam Nawaz tweeted saying that the perpetrators should be given a harsh sentence so that no one would dare do this again.

Because we didn’t follow up on the mass rape case at Kasur, today we ask #JusticeForZainab

I’m stunned and deeply grieved to learn of the abuse & murder of a 7 years old angel in Kasur. The low life sick person/s responsible for this heinous act must be given the worst possible punishment, so that no one dares repeating the same.

Because we didn’t follow up on the mass rape case at Kasur, today we ask #JusticeForZainab