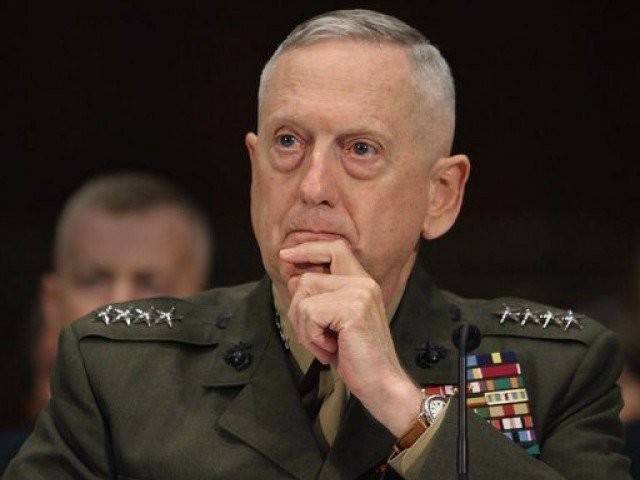 Says Pentagon is still working with Pakistan and will restore the aid if it sees actions against the terrorists. PHOTO: AFP

WASHINGTON: The United States is examining ways to mitigate any Pakistani retaliation as it piles pressure on Islamabad to crack down on militants, a senior US official said on Friday, cautioning that US action could extend beyond a new freeze in aid.

Pakistan is a crucial gateway for US military supplies destined for the US and other troops fighting a 16-year-old war in neighbouring, landlocked Afghanistan.

So far, the Pentagon says Pakistan has not given any indication that it would close its airspace or roads to military supplies and US Defence Secretary Jim Mattis played down concerns on Friday.

But Washington has only just begun to work through its new plan to suspend up to roughly $2 billion in US security assistance, announced on Thursday. It came days after US President Donald Trump tweeted that Pakistan had rewarded past US aid with “nothing but lies & deceit.”

The senior Trump administration official, who spoke on condition of anonymity, said Washington hoped that the aid suspension would be enough to communicate its concern to Islamabad.

But the official cautioned that the freeze was also not the only tool that the US had to pressure the country – suggesting it might resort to other measures, if needed.

“We are considering many different things, not just the (financial) assistance issue,” the official said.

“We are also looking at Pakistan’s potential response … and we are looking at ways to deal with that and to mitigate the risks to the relationship.”

The official declined to detail what steps were under consideration, including whether that might include possible unilateral US military action against militants in Pakistan.

But as Trump allow the US military to again ramp up its war effort in Afghanistan, including with the deployment of more US troops alongside Afghan forces, the official acknowledged a sense of urgency.

The United States has long blamed the militant safe havens in Pakistan for prolonging the war in Afghanistan, giving insurgents, including from the Haqqani network, a place to plot attacks and rebuild its forces.

“We believe we owe it to the Americans in harms’ way in Afghanistan. We simply can’t ignore the sanctuaries if we are going to make progress in Afghanistan,” the official said.

Mattis, speaking to reporters at the Pentagon, said he was not concerned about America’s ability to use Pakistan as a gateway to resupply US forces in Afghanistan.

“I‘m not concerned, no,” Mattis told reporters at the Pentagon, adding he had not gotten any indication from Pakistan that it might cut off those routes. Mattis travelled to Pakistan last month.

“We’re still working with Pakistan and we would restore the aid if we see decisive movements against the terrorists – who are as much a threat against Pakistan as they are to us.”

The United States has also said some of the frozen aid could be released on a case-by-case basis, and none of it will be spent elsewhere – leaving the door open to full reconciliation.

The Pakistani reaction has so far been limited to harsh rhetoric, with Pakistani Foreign Minister Khawaja Asif saying the United States was behaving toward Pakistan as “a friend who always betrays.”

But opposition leader Imran Khan, a former cricket star tipped as the next Pakistani prime minister, said it was time for Pakistan to “delink” from the United States.

We don’t need security aid at the cost of national dignity: DG ISPR

The senior Trump administration official who spoke on condition of anonymity acknowledged that a Pakistani cut-off would greatly complicate US resupply efforts in Afghanistan.

The official said the administration was developing “risk mitigation plans,” but acknowledged that examination of a northern network of alternative routes used in the past was “still at a very broad level.”

“And it would not be easy.”